Czechoslovakia opened the Jerusalem office of its embassy last Thursday, and Kosovo, the first European Muslim-majority country, announced the opening of their embassy in Jerusalem in a statement released Sunday. Immediately, the Palestinian Authority, the Arab League, and Gaza Strip terrorist group, Hamas, denounced the moves as a “violation of international law.”

Much of the international community does not recognize Israel’s claim to Jerusalem. They believe the fate of eastern Jerusalem, which the Palestinians want as the capital of their future state, should be decided through negotiations.

But, thanks to the United States paving the way by moving its embassy in 2018, other countries have followed suit in recognizing Jerusalem as Israel’s capital. The Czech Republic and the Balkan nation of Kosovo join the US and Guatemala in establishing embassies in the Holy City. Several other nations have promised to open some level of diplomatic missions in Jerusalem.

In a ribbon-cutting ceremony at the new embassy office, Czech Prime Minister Andrej Babis said, “We keep our promise. The Czech Republic will have a full-fledged diplomatic mission here in Jerusalem.” Babis also praised Israel’s “knowhow and experience” in the battle against the coronavirus.

Israel’s Foreign Minister, Gabi Ashkenazi, thanked the prime minister for “leading the change in Europe toward the city of Jerusalem as a whole and toward the connection with the State of Israel. The whole Middle East has experienced a paradigm shift.”

Israel and Kosovo, another country that has had to struggle for independence, established diplomatic ties last month, after deciding to mutually recognize each other last September at the White House. While most Western nations recognize Kosovo, Russia, China, and Serbia do not. Israel had been hesitant to recognize the statehood of Kosovo, fearing it would set a precedent for Palestinians in their quest for statehood.

“Recognition by Israel is one of the greatest achievements for Kosovo, coming at a key moment for us, thanks to the United States, our common and eternal ally,” Kosovo Foreign Minister, Meliza Haradinaj-Stubla, said in the diplomatic ties ceremony in February.

Former President Trump’s recognition of Jerusalem, moving of the embassy to Jerusalem and spearheading the Abraham accords have emboldened many nations to also seek deeper ties with the Jewish state, as they have much to gain in technology and security. Waiting for a peace deal that the Palestinian leadership doesn’t seem to want, became exhausting. It is a new Middle East post-Trump. Hopefully President Biden can recognize this. 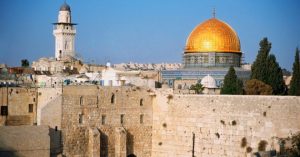