The Notre Dame Cathedral in Paris, a prime example of Gothic architecture and the seat of Paris’ Roman Catholic archbishop, was engulfed in flames on Monday (April 15). What is its history, its significance and how have cathedrals like it recovered from disaster?

When was Notre Dame built?

Its cornerstone was laid in 1163, and work continued through the 14th century, when its large flying buttresses — its famous arched exterior supports — were installed. The cathedral’s 850th anniversary was celebrated in 2013. It has been the most visited monument in France, according to the Paris Convention and Visitors Bureau.

What key events have been held at Notre Dame?

Napoleon was crowned French emperor there in 1804. Joan of Arc was beatified in the cathedral by Pope Pius X in 1909, centuries after she had helped France fight the English and been burned at the stake. Gen. Charles de Gaulle attended a Mass at Notre Dame when the French celebrated the liberation of Paris from the Nazis in 1944. It has been the site of royal weddings and was the location of the requiem Mass for former President Francois Mitterrand.

Besides these real-life events, the cathedral was the setting for Victor Hugo’s 1831 novel “The Hunchback of Notre Dame,” whose title character, Quasimodo, was played by Charles Laughton in the 1939 film and voiced by Tom Hulce in a 1996 animated Disney movie. 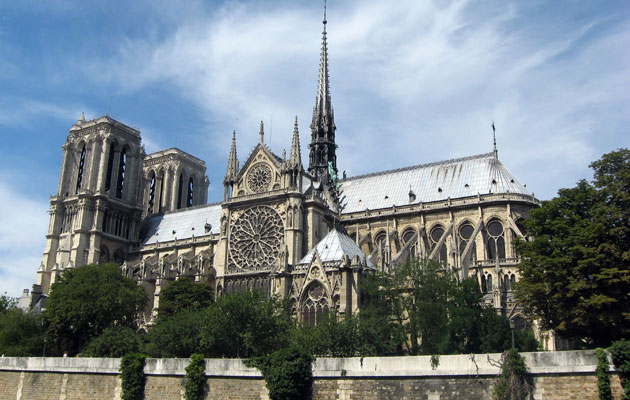 If Notre Dame can rebuild, what is the largest challenge ahead?

Money. “It is really challenging in this day and age to raise money to implement repairs for cathedrals like this,” said Jim Shepherd, director of preservation and facilities at Washington National Cathedral. “At Notre Dame, they struggle with raising money even for the resources they had to do their renovation.” The French cathedral sought donations from beyond its country’s borders — including from wealthy Americans — for the work that was in progress.

Shepherd said his U.S. cathedral has likewise struggled to pay for its repairs since the 2011 earthquake caused $34 million in damage (it still needed $19 million as of March) and is only halfway finished with its work.

He said Notre Dame will also need the right on-the-ground experts in the immediate aftermath of the fire.

“You’re talking about things that might be … 800 years old that they’re trying to pull out that might have been partially burned, partially damaged by water,” he said.

What are some examples of its treasure trove?

“They were placed at the summit of the church in 1935 by the archbishop of Paris, to protect the building,” he said in a statement. “If so, they are now likely reduced to ashes. It is a great loss for Catholics and for art lovers worldwide.”

Ferri, now a curator of the rare and manuscript collections at Cornell University, added, “the cathedral is filled with sculptures, paintings, stained glass, liturgical art. I particularly admire the 14th century wooden panels depicting the life of Christ, and the 78 choir stalls in carved wood added in the 18th century. Now, I am afraid they might all disappear in the ongoing fire. We all need to hope and pray for the building, because it is part of the world cultural heritage.”

Do the staff at major cathedrals talk to one another about preservation, safety and avoiding crises like this one at Notre Dame?

Yes. Shepherd said Washington National Cathedral has a “friendly relationship with New York’s Cathedral of Saint John the Divine,” and their staffs have visited each other’s edifices.

“We actually just had some visitors from the U.K., from York Minster cathedral, who came to see how we were implementing our earthquake repairs and our fire and life safety repairs,” he said. “We have not had direct dialogue with Notre Dame yet, but I hope that we will as this disaster moves forward and they look for resources and need for us to give feedback about how they might get into the recovery mode. But we are a community of cathedrals that have unique problems that are specific to cathedrals and we like to make sure we are being as magnanimous as possible with our lessons learned and help each other out with such crises.”

What does it mean for a building like Notre Dame to be destroyed during Holy Week?

“This is the absolute worst time it can happen,” said Shepherd, of the Washington National Cathedral, of the week that includes mourning and reflection on the Crucifixion and a time of celebration of the Christian belief in Jesus’ resurrection on Easter Sunday.