Iran said on Thursday, March 10, that its test-firing of ballistic missiles, designed to be able to hit Israel, were not a violation of a landmark nuclear deal reached in 2015 with six major powers, state TV quoted a senior official as saying. 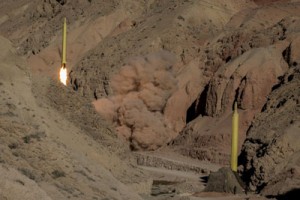 “Iran’s missile program and its test-firing of missiles in the past days during a military drill are not against its nuclear commitments and the nuclear deal reached with the six powers,” said Foreign Ministry spokesman Hossein Jaberi-Ansari.

Iran’s elite Revolutionary Guards Corps (IRGC) test-fired several ballistic missiles on Tuesday and Wednesday, state media reported. The tests are seen as a challenge to a United Nations resolution and the nuclear deal.

The two ballistic missiles were emblazoned with the phrase “Israel must be wiped out” in Hebrew, Iranian media reported.