Like everyone else, U.S. Protestant pastors may be closely watching the recent events related to Iran, but probably not because they think it has anything to do with the return of Christ.

Pastors are three times more likely to believe Christians can speed up the return of Christ by the spread of their faith than by backing certain geopolitical changes, according to a new study from Nashville-based LifeWay Research.

“While Scripture specifically says we cannot know the day or the hour of Jesus Christ’s return, we were interested in pastors’ views on whether Christians can play a role in bringing about that return any sooner,” explained Scott McConnell, executive director of LifeWay Research. 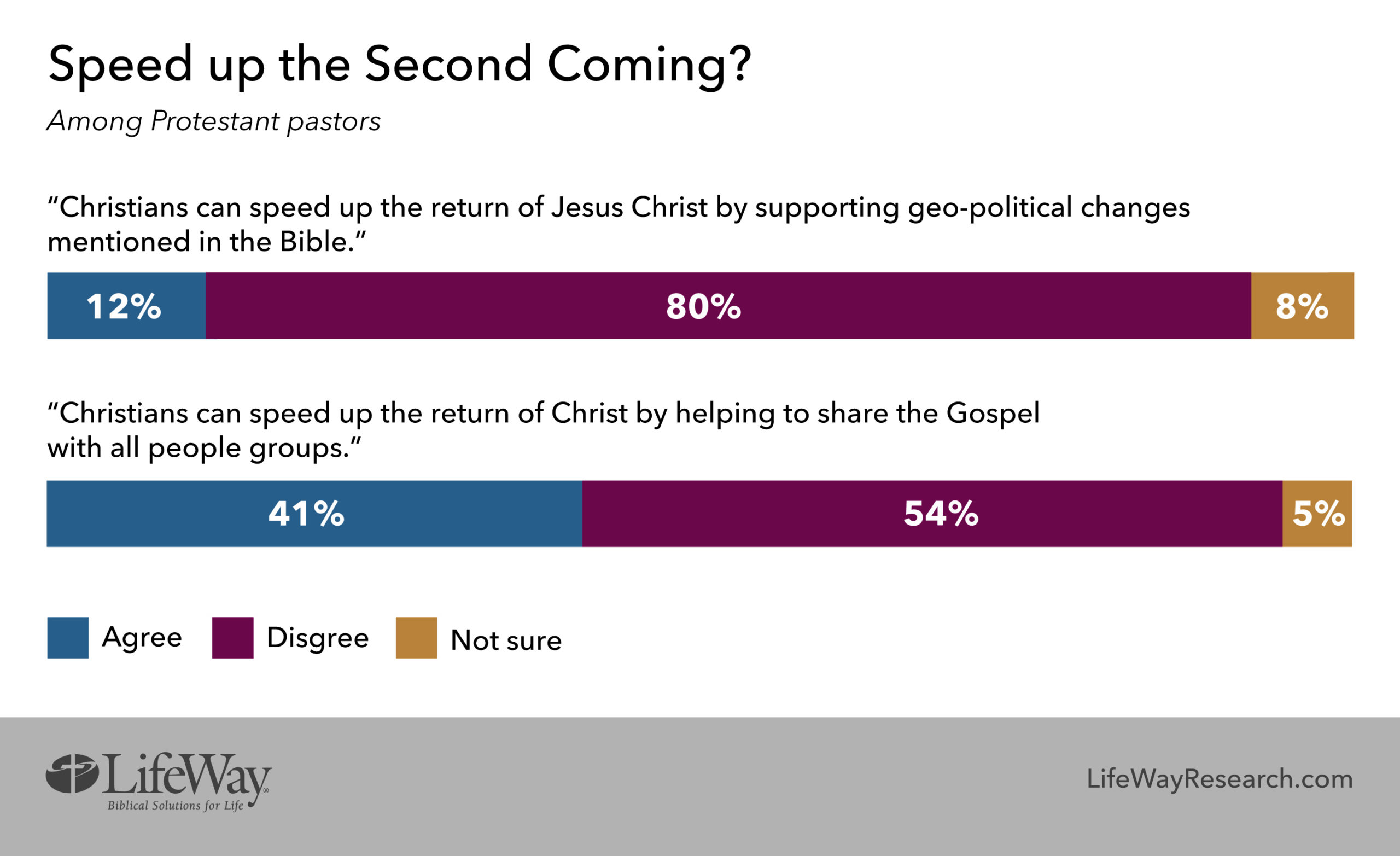 Around 1 in 8 Protestant pastors (12 percent) believe Christians can speed up the second coming of Jesus by supporting geopolitical changes mentioned in the Bible, with 5 percent strongly agreeing.

Four in 5 pastors (80 percent) don’t believe their support will have an impact on the timetable of Christ’s return, including 61 percent who strongly disagree.

During heighted conflicts with Syria, a 2013 LifeWay Research study found many Americans were likely to link global conflict with end times.

Almost 1 in 3 saw the conflict as part of the Bible’s plan for the end times. One in 4 thought a U.S. military strike in Syria could lead to Armageddon. And 1 in 5 believed the world would end in their lifetime, including 32 percent of evangelicals.

“A large majority of pastors do not see biblical prophecies about future changes among nations as a roadmap for advocating specific international engagement,” said McConnell.

In the most recent study of Protestant pastors, there is no significant difference between mainline and evangelical pastors regarding their views about international political affairs speeding up the return of Christ. There are, however, differences among other demographics.

Additional education decreases the likelihood a pastor agrees that support from Christians of geopolitical events will speed up the return of Christ. Pastors without a college degree are more than twice as likely to agree than those with a bachelor’s or master’s degree — 22 percent to 10 percent.

Evangelism to bring about end times

In what Christians call the Great Commission (Matthew 28:19-20), Jesus tells his followers to “make disciples of all nations,” which is often understood as a command to spread the faith to all distinct people groups.

Previously in Matthew’s Gospel, Jesus connects this occurring to His second coming. “This good news of the kingdom will be proclaimed in all the world as a testimony to all nations, and then the end will come” (Matthew 24:14 CSB).

Protestant pastors are split, however, on whether Christians can actually speed up the return of Christ by helping to share the Gospel with all people groups.

Close to 2 in 5 (41 percent) believe Christians can hasten Jesus’ second coming through world evangelism, while around half (54 percent) disagree.

“The Great Commission was a task Jesus gave His followers to be doing while He is gone,” said McConnell. “Four in 10 pastors believe the pace of sharing the message of what Jesus has done will impact the timing of Christ’s return. Presumably many of those who disagree would assert exclusively divine control over Christ’s return.”

Denominationally, Pentecostal pastors (66 percent) are the most likely to agree Christians can speed up Jesus’ return by sharing the Gospel with all people groups.

Those with no college degree (56 percent) are more likely to agree than those with a degree.

Pastors 65 and older are the age group most likely to agree (52 percent).

White pastors are more likely than African American pastors to disagree that the second coming of Christ can be sped up by global evangelism — 55 percent to 43 percent.

Immoral until the end?

Whenever the second coming of Christ may be, most Protestant pastors believe immorality will be more common until Jesus returns.

Almost 7 in 10 (68 percent) agree “culture will increasingly get less moral until Jesus Christ returns.” Around a quarter (26 percent) disagree.

Again, education plays a role in pastors’ likelihood to agree. Those with no college degree (90 percent) or a bachelor’s (81 percent) are more likely to believe immorality will increase until the return of Jesus than those with a master’s (61 percent) or a doctoral degree (63 percent).

“On the surface, the responses of most pastors could be described as feeling helpless regarding these specific aspects of the future,” said McConnell. “Yet the persistence of their faith amidst a lack of control points to an even greater level of hope.”

The phone survey of 1,000 Protestant pastors was conducted from Aug. 30 to Sept. 24, 2019. The calling list was a stratified random sample, drawn from a list of all Protestant churches. Quotas were used for church size.

Each interview was conducted with the senior pastor, minister or priest of the church called. Responses were weighted by region to more accurately reflect the population. The completed sample is 1,000 surveys. The sample provides 95 percent confidence that the sampling error does not exceed plus or minus 3.3 percent. Margins of error are higher in sub-groups.

For more information or to view the complete report, visit LifeWayResearch.com.

Aaron Earls is online editor of Facts & Trends and a writer for LifeWay Christian Resources.

Opinion: Will I Be Fat in Heaven?

‘God Was Exactly With Us,’ Says Winsome Sears

Christians Have Questions—God Has the Answers

Francis of Assisi: The Not-So-Loveable Saint