Good News groups get a cold shoulder in Portland

Home » Good News groups get a cold shoulder in Portland

Some groups in Portland, Ore., are taking an evangelical children’s camp to task for talking to the city’s youngest residents about Jesus. The camps, which operate like a traveling Vacation Bible School, have endured protests, negative advertisements in local newspapers, and accusations of being a fundamentalist sect.

The group chose Portland for this year’s summer camps because of the city’s reputation for being un-churched. To put on the five-day camps, Child Evangelism Fellowship (CEF) partnered with about 30 churches of various denominations throughout the Portland metropolitan area. Each church helps organize camps in three different locations.

CEF’s arrival in Portland sparked unexpected anger and protests. Protect Portland Children formed to protest the camps. It heavily promotes a book called The Good News Club: The Christian Right’s Stealth Assault on America’s Children. It claims CES is a fundamentalist sect, teaches shame to children, and harms them psychologically with a doctrine of sin.

“We believe that these doctrines are harmful to 5-year-old children,” Protect Portland Children founder Robert Aughenbaugh told The Oregonian

Aughenbaugh’s group even bought a full-page ad in an alternative weekly newspaper to warn parents about the camps. It features a picture of a child wearing a sign that says “sinner.”

Mike Albin is the pastor of New Hope Church, a conservative evangelical church of about 150 members in Oregon City, a suburb 45 minutes south of Portland. New Hope is one of three Oregon City churches that have partnered with CEF this week for camps, providing about 24 volunteers to work with the four or five trained volunteers from CEF. Together they are hosting nine five-day camps in the Oregon City area. The church volunteers help with things like registration and games while the CEF volunteers do most of the teaching. They hold the camps at area public parks and mobile home communities.

All of the churches CEF partners with are traditional, evangelical denominations, Albin said. His church has a good relationship with the Oregon City Chamber of Commerce, and is well-respected in the community. CEF teaches basic evangelical theology and is “not a cult whatsoever,” Albin said. 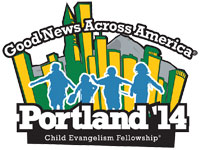 most vacation Bible schools, he said. The handouts they provide have stories about Jesus being our best friend, and Bible-themed games and crossword puzzles.

“You can go into any evangelical church that preaches the gospel and you can year what CEF is talking about,” said Albin, who attended his first camp in 1978. He described the accusations against the organization as “angry” and “uninformed.”

Albin rejected accusations that CEF’s methods were subversive or deceptive. Parents have to sign permission forms before their children can come to the camps and are encouraged to visit.

The anger is not directed just at the summer camps, but the long-term goal for churches to establish relationships with the families so they can lauanch once-a-week programs in the schools come fall. The churches pay to rent space and for extra janitorial service. They have the same kind of access to the schools as any other group. Albin emphasized that CEF doesn’t cross any church-state barriers

“We can’t even pass out literature while we’re there,” he said. “The rhetoric that’s coming across in this cultural war we’re in is really to discredit and spread information that’s not true about the organization.”

He added that despite claims the teaching of sin and salvation coming from CEF harms children psychologically, school districts in other states have specifically asked CEF to continue holding clubs, because they bolster school morale

“It’s been a positive impact, not a negative one in any way,” he said.