As many Americans gather with their loves ones for the holidays, a timely new survey from Pew Research confirms what miles of traffic jams and airport lines suggest: Family is the No. 1 source to which Americans look for meaning, fulfillment and satisfaction in their lives.

The survey, conducted in two waves in 2017, found clear and consistent answers among all demographic groups, as nearly 70 percent of Americans mention their family as a source of meaning and fulfillment.

After family, Americans said they drew meaning and satisfaction from being outdoors, spending time with friends, caring for pets and listening to music. In this wide range of pursuits, religion ranked behind those things as something that gave them “a great deal” of meaning.

“If you then follow up and ask to which of these is the most important source of meaning, there religion is a clear second,” said Gregory A. Smith, associate director of research at Pew, and one of the primary researchers of this survey. 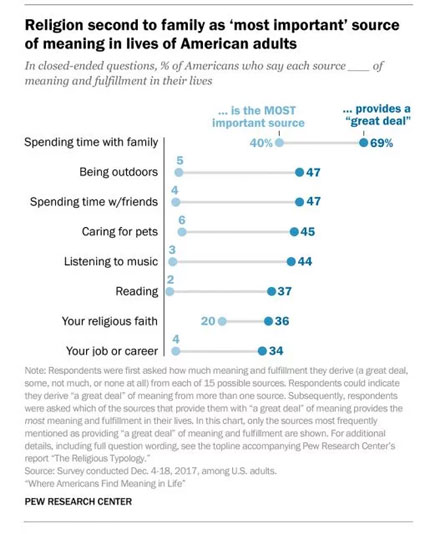 No surprise, one group in particular stood out: Two-thirds of evangelicals surveyed said they derive a great deal of meaning from their religious faith. And almost half of evangelicals say religion is the most important source of meaning in their lives.

But evangelicals weren’t the only polling segment to find meaning in religion. Half of black Americans as a group said they derive “a great deal” of meaning from their religion.

Broken down according to political persuasion, conservative Americans are more prone to find meaning in religion, while liberals find it in creativity and causes, the survey found.

The survey consisted of two rounds: an open-ended questionnaire conducted in September 2017, asking Americans to describe in their own words what makes their lives feel meaningful, and a closed-ended questionnaire conducted in December 2017, asking Americans to rate how much meaning and fulfillment they draw from each of 15 possible sources.

Jamie Aten, executive director of the Humanitarian Disaster Institute at Wheaton College, said the findings about family make sense, especially, he noted, since meaning-making is also a social construct, not just an individual one.

“If you look at the cultural norms within the U.S. , there’s a high emphasis placed on family and you see that reflected out in the survey responses,” said Aten. “We also see it valued across most major world religions. Many of our institutions promote family as a highly valued unit. We see that cutting across the messaging we receive on a daily basis.”

The survey also found that Americans with high levels of income and education are more likely to mention friendships, good health, stability and travel.

That too made sense to Aten. He pointed out that people find meaning in those things that are obtainable.

“It points out the real challenges that individuals in a lower income level face: Health may be ranked out of reach because of what people have experienced, oppression or racism or other challenges.”

Fewer Children… Because of “Climate Anxiety”?