Florida legislators favor ‘In God We Trust’ motto in schools

A Florida legislative subcommittee has unanimously approved a bill that calls for the state’s motto, “In God We Trust,” to be placed in every public school.

The bill, which calls for each district school board to adopt rules about displaying the motto “in a conspicuous place,” was co-sponsored by state Rep. Kimberly Daniels, a Democrat and a minister affiliated with churches in Jacksonville and Fort Lauderdale.

“This motto is inscribed on the walls of this great capital and inked in our currency and it should be displayed so that our children will be exposed and educated on this great motto, which is a part of this country’s foundation,” said Daniels in brief remarks Tuesday (Jan. 23) before the panel.

Other legislators voiced support for the measure, citing a national trust in God.

But Maggie Garrett, legislative director for Americans United for Separation of Church and State, told the Tampa Bay Times such a stance would differ from court rulings barring schools from promoting religion.

“Not all kids in Florida public schools believe in God,” Garrett noted, and they shouldn’t feel pressured while in school.” 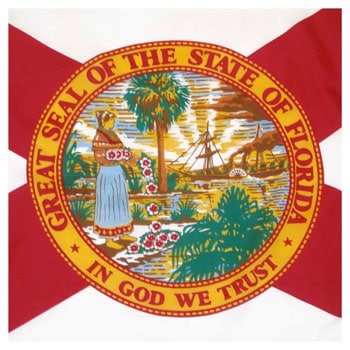 A parent opposing the measure said the proposal was unnecessary because a state statute already requires schools’ display of the state flag, which includes the motto. The phrase has been part of the state seal since 1868 and has been the state’s official motto since 2006.

“That current statute satisfies the requirement to display our state motto, which is, of course, on our state flag,” Sue Woltanski of the group Common Ground told the panel. “Common Ground is opposed to bills that fail to address real issues in education and waste taxpayer dollars and time.”

In response to a question from another legislator about the costs of the proposal, Daniels said she didn’t think it would be significant.

“I think the importance of our children knowing their history and being able to see this will far much outweigh whatever small cost that there may be,” said Daniels.

State Rep. Ralph Massullo, a Republican, said he agreed with Daniels and compared the display of the motto to that of posted pictures of elected officials in public buildings and changing them in new administrations.

“If there would be a time when the motto of our state would change for whatever reason — and God help us if it does — then that can change as well,” he said.

The motto “In God We Trust” has been on U.S. coins since 1864 and on paper currency since 1957. Its presence  — on coins to license plates — has been a subject of debate for decades.

In 2017, Tennessee approved an optional license plate that says “In God We Trust.” In 2014, atheists lost their latest fight over removing it from currency when a court ruled it does not violate the U.S. Constitution.

Atheist seeks removal of ‘God’ from US currency — again