Anti-Semitism is increasing in both prevalence and violence in the U.S. and around the world. But Christians United for Israel (CUFI) is fighting back and has produced a feature-length documentary “NEVER AGAIN?”

“Violent anti-Semitism is rising across the country, and people of conscience cannot sit idly by,” said CUFI founder and Chairman Pastor John Hagee.

“Anti-Semites have used the fertile ground of ignorance to grow their malicious ideology. If we are to stem the tide, we must inoculate the next generation against the world’s oldest hatred by empowering them with knowledge and reaching them with a message of unity. If we are to fulfill the promise of ‘Never Again’, we cannot allow the memory of the Holocaust to fade.”

The film from the 8-million member CUFI could not be more timely. Just this month, 200 survivors of the infamous Auschwitz Nazi extermination camp gathered for Holocaust Remembrance Day. At almost the same time, Pew Research showed 45 percent of Americans did not know 6 million Jews died in the Holocaust.

“Viewers of the film will be guided by a Holocaust Survivor and a former radical Islamist,” said Producer Rick Eldridge, CEO of ReelWorks Studios. “They will learn about the history of anti-Semitism and come to understand why all of us, regardless of faith or political persuasion, have a responsibility to keep the promise of ‘Never Again?’”

“NEVER AGAIN?” will engage contemporary audiences with the horrific events of 75 years ago and demonstrate why they must be understood and remembered by the coming generation.

“This is not your parents’ documentary,” said CUFI co-executive director Shari Dollinger. “It meets the audience where they are, engaging them in a modern and cutting-edge manner. If we’re not to see history repeat itself, we must ensure the next generation learns the lessons of the past.” 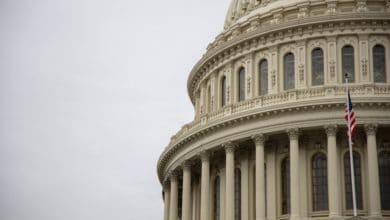 Virginia State Democrats Storm Out of Chamber During Prayer