After the massacre, a Las Vegas church seizes the chance to serve

Home » After the massacre, a Las Vegas church seizes the chance to serve

A mass shooting is a test for any religious institution, and a massacre like the one that left 58 dead and hundreds injured in Las Vegas, even more so.

Hope Church, a growing multi-ethnic congregation that attracts 3,000 people each weekend, says it’s up to the challenge.

“This is the day when we get the opportunity to really rise up and serve the city and love the city and demonstrate the love of God for the city,” said Vance Pitman, the founder and senior pastor. 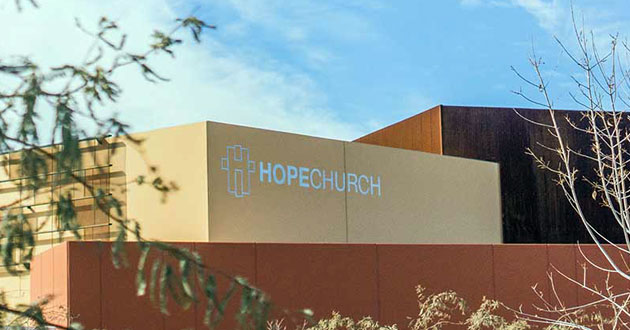 Pitman only learned of the magnitude of the killings at a country music concert when he awoke Monday (Oct. 2), but he quickly assembled his staff to sketch out the beginning of a response:

•  The church called in all of its 15 pastors to be on hand as it opened its doors as a safe space for prayer and counseling, and, if needed, a shelter for anyone dislocated as a result of the shooting at Mandalay Bay Resort and Casino.

•  It urged its members to donate blood and worked to get a mobile blood unit on the church grounds to help with the effort.

•  Pitman had several phone conversations with police and other law enforcement officials to let chaplains and officers know the church was ready, willing and able to provide physical and emotional support to anyone in need.

So far, the church has not heard that any of its members was hurt during the rampage, but it was still too early to be sure. Pitman said he received two calls, one from a member whose best friend was wounded, another from a member whose friend’s daughter was shot and undergoing surgery.

The church, which is located about 13 miles from the site of the shooting, the outdoor Las Vegas Village and Festival Grounds, sees its mission as being a blessing on the city.

“We believe the church is to serve the city,” Pitman said. “That’s why the church exists.”

Hope Church takes that mission seriously. The church has 45 families undergoing training to become foster parents. It is developing initiatives to fight human trafficking in the city and is working to improve local public education.

But it also wants to bring people to God and makes no bones about its evangelistic outreach. The shooting, Pitman said, is an “opportunity for the church to shine the love and light of Jesus and his gospel.”

Of course, other churches, synagogues and mosques, were also mobilizing to help a wounded city — regardless of their mission attitudes.

“I put myself and my church at the disposal of the county and law enforcement and informed them that if there was anything we could do, I’m willing to do it,” said the Rev. John Nicholas of Las Vegas’ St. Michael Antiochian Orthodox Church.

But Baptists in particular have a reputation for their nimble, service-oriented response to natural and human-made disasters. Pitman is a product of that theological readiness.

He was commissioned as a missionary through the North American Mission Board of the SBC, and is now a national mobilizer for the board. A native of Alabama, Pitman was sent to organize a church in 2000, which he did — from a humble cast of 18 people gathered in his living room.

He has since been disabused of whatever stereotypical views he may have had of Sin City. Outside its downtown strip, Las Vegas is a beautiful, family-friendly and multiethnic city, he said.

“The reputation of it being ‘Sin City’ is because of the one million tourists a week,” said Pitman, referring to its downtown casino scene. “It’s not because of the people who live here and who call Las Vegas home.”

Pitman knows his work is cut out for him. Nevada, and Las Vegas in particular, is one of the less religious states in the country. A recent Pew Center study found that 49 percent of Nevada residents are “highly religious,” but only 31 percent attend religious services.

At services this coming weekend he’ll address the issue of belief and ask, “Where’s God in all of this?”

He already has a partial answer.

Mourning in the wake of Las Vegas