Why Dr. Jeff Brodsky Has Been Barefoot for Almost a Decade

Home » Why Dr. Jeff Brodsky Has Been Barefoot for Almost a Decade

Dr. Jeff Brodsky has proven over the years that he will do just about anything to bring awareness to important causes. For the past nine and a half years, he has gone barefoot—all over the world, in any weather—to bring awareness to child sex trafficking. He has led ten, 101 mile walks across Death Valley, performed as Snuggles the Love Clown, and in 1983 rode a bicycle from California to New York City.

In less than 90 days, at 67 years of age and after two heart attacks, Brodsky will embark on another cross-country bike ride from Disneyland in California to Disneyworld in Orlando, Florida on April 1, 2020. According to the Guinness Book of World Records, there is no one on record who has attempted to bicycle that far in bare feet.

Brodsky’s organization, JOY International, had another successful year in 2019, rescuing human trafficking victims and training police around the world in anti-trafficking techniques. Brodsky and his team reported several hundred rescues this past year including a 21-month-old baby who was kidnapped, as well as 8 and 10 year-old girls who were being sexually abused. The years spent rescuing children from the horrors of human trafficking are chronicled in Brodsky’s memoir, “The Least of These: One Man’s Remarkable Journey in the Fight Against Child Trafficking.” He also recently released a new children’s book “Why Are You Barefoot?” which is written specifically to elementary-age kids in a language that helps them learn to be safe in a world that Brodsky says is increasingly more dangerous for children every day.

“My motivation for bicycling barefoot nearly 3,000 miles is simple,” says Brodsky. “If I can motivate one person to action to help rescue just one more child from the most heinous crime ever perpetrated on a human being, then every mile will be worth it. I specifically chose the route from Disneyland to Disneyworld because they are known as the happiest places on earth, and the children that are trafficked are in the most evil, unhappiest places on earth. They may never see a Disneyworld park in their lives or anything like it because so many of them will die young or commit suicide.”

The efforts of JOY International, along with their partners, have helped to move Cambodia from a Tier 3 country (no efforts against trafficking) to a Tier 2. The U.S. is considered Tier 1 due to its aggressive laws and enforcement against trafficking. JOY International employs a Director of Global Police Training and Tactical Operations who has trained Special Forces Anti-Human Trafficking Police and SWAT teams. Their training techniques for airport personnel to spot potential human traffickers recently resulted in the rescue of a 9-year-old in the parking lot of an Alaskan airport.

“On the one year anniversary of my decision to go barefoot nearly 10 years ago, I was in my living room about to put on socks for the first time in twelve months,” says Brodsky.

“But God wouldn’t let me do it. I mean, the sock would, literally, not go on my foot! I cried out to God and asked Him what He wanted from me after I went barefoot for an entire year. I heard Him speak these words to me— ‘Keep going, those children are still out there.’ I knew in that moment that until the last child is rescued and sex trafficking comes to a complete stop, I’ll be walking around the world in bare feet the rest of my life.” 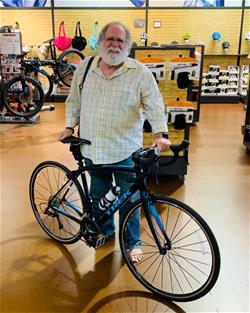 Dr. Jeff Brodsky is the Founder and President of JOY International, a non-profit organization which exists to be involved in, or help to coordinate, the rescue, restoration, reintegration, and prevention of the commercial sexual exploitation of children, teens, and young women, both domestically and internationally. For over 38 years, to raise funds and awareness, he has performed as (the now retired) Snuggles the Love Clown, ridden a bicycle solo from California to New York City, led ten 101-mile walks across Death Valley, and traveled to over 70 nations. He and his wife, Gail, live in the foothills above Denver, Colorado and have three children and eight grandchildren. For more information, visit http://www.thebarefootmile.org.