‘Unplanned’ tells the story of a former Planned Parenthood director

Abby Johnson was “vulnerable.” Raised in a Christian pro-life home and a church that never really talked about abortion, she believed her employer Planned Parenthood was “a woman’s empowerment organization.”

Then she became a clinic director and saw a 13-week-old fetus flinch and fight for his fleeting life during an ultrasound-guided abortion. 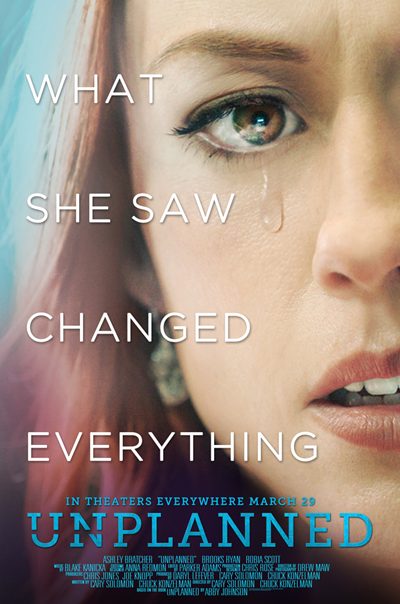 Shocked at the truth of abortion, she quit her Planned Parenthood clinic job in Bryan, Texas, started a ministry and wrote a book about her experiences in 2011 that is the basis for “Unplanned,” opening in theaters March 29.

“Moral relativism is rampant in our society,” said Johnson. “In these times where everybody talks about her truth or your truth or my truth, I really think that people are just looking for the truth, and they’re going to find that in this film. They’re going to see the redemptive power of Christ in this film.”

Through her ministry — And Then There Were None (ATTWN) — founded in 2012 with husband Doug, Johnson helps other abortion clinic workers leave the industry, find redemption in Jesus and become active church members in their communities. To date, ATTWN has helped 487 abortion clinic employees leave their jobs, Johnson said.

Unplanned is rated R by the Motion Pictures Association of America (MPAA), which Johnson believes only evidences the violence that is abortion. The film includes black-and-white sonogram images with special effects dramatizing an actual abortion.

“It’s rated R because the MPAA sort of stumbled backwards into the truth, admitting that abortion is violent,” said Johnson. The film is appropriate for teenagers, but should only be viewed by preteens with their parents’ informed judgment, Johnson said.

Johnson, pregnant with her eighth child, took her 12-year-old daughter to an Unplanned screening.

“My daughter is very knowledgeable about abortion. We talk about abortion all the time,” Johnson said. “My children have grown up hearing about this in our home. She goes and prays with me outside abortion clinics.”

Johnson was vulnerable to Planned Parenthood’s deception because the subject of abortion was not discussed much during her childhood, she said, even as her parents described themselves as pro-life.

“I think if that conversation has been breached in your home, then bringing a preteen to the film is appropriate. If it has not, and you are sort of just treading into this territory with your children, then I definitely think that now is a good time to start having that talk,” Johnson said.

“I tell people we’ve performed abortions on girls as young as 10 and 11, so you’re not doing your children any favor by sheltering them from the reality of pregnancy and abortion,” she said. “I feel very strongly that we need to be talking about these things with our children.”

Filmmakers believe a PG-13 rating would be more appropriate, according to producer Daryl Lefever.

“I would say that it’s intense to watch, but it’s not gruesome or gory to watch,” Lefever said. “We tell everybody we were going for a PG-13 rating, and it would have been a serious PG rating.

“We definitely think that if a child is 13 or younger, then their parents really need to know the maturity level of their child and what other visual stimuli the child … has already seen,” said Lefever. “There’s been 11-year-olds that have seen the movie and it actually initiated great conversation with their parents.

“And there might be some 11-year-olds who are just not as experienced in going to movies, and it could really be intense for them,” he said.

The movie chronicles Johnson’s employment that began at Planned Parenthood as a college student in 2001, the true story of her chemical abortion with the abortion pill in college, and her radically changed heart while assisting a doctor during an ultrasound-guided abortion in 2009.

Christians as well as the unsaved need to see the film, said Johnson, a member of St. John Vianney Catholic Church in Round Rock, Texas.

“If we can get Christians to fill up these seats, maybe there will be a wave of conviction within the Christian church to really move and act and do something to help end abortion,” Johnson said. “We have a lot of apathy inside of our own churches.”

“Over half of all women that have abortions identify as Christian, and one third of them have never told anybody in their lives that they had an abortion,” Lefever said, although statistics vary. “So there’s a lot of shame; there’s a lot of grief in our church pews, and nobody’s talking about it.”

In a 2015 LifeWay Research study sponsored by Care Net, nearly 70 percent of women who had an abortion described themselves as Christians. And 43 percent attended church at least monthly at the time of their procedures. More than half, 52 percent, said no one in their church knows of their abortion.

“The other thing this movie does, in addition to making people aware of what an abortion is, is offer redemption and hope and love and forgiveness to women that have made that choice in their history,” Lefever said, “and are looking for an opportunity to share with someone and come out from under that grief and shame.”

Cary Solomon and Chuck Konzelman, who wrote the theatrical hit “God’s Not Dead,” co-wrote and co-directed Unplanned. Ticket information and educational and promotional resources are available at unplannedfilm.com.