This week, two Muslim physicians were indicted in a high-profile genital mutilation case in Michigan: One was charged with performing female genital cutting on two 7-year-old girls, and the other with allowing use of his clinic for the procedure. Both the doctors and victims belong to the Dawoodi Bohra sect, a branch of Shiite Islam based in India but also found in Pakistan, Yemen and East Africa, whose adherents regularly practice cutting. This is believed to be the first time anyone has been charged under a U.S. federal law criminalizing FGC.

The arrest reignited a discussion on female genital mutilation in the U.S., including among Bohra Muslims. It also spurred a Michigan state lawmaker to introduce anti-Shariah legislation, even though the practice is not based on Islamic law. So what is FGM, and what are its religious underpinnings, if any?

What does female genital mutilation mean? 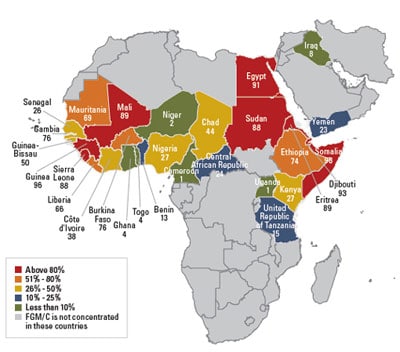 The terms “female genital mutilation” and “female genital cutting,” frequently abbreviated as FGM or FGC, refer to cutting the external female genitalia for any nonmedical reason. Depending on local or cultural customs, that might mean a small nick on the clitoris or rubbing a razor against the clitoris or labia minora. “That’s the most common category,” Raquel Evita Saraswati, a Muslim advocate against gender violence, told RNS. But she added that it can also entail the removal of all the external genitalia “and sealing of the entire area, leaving just a small hole for urination.”

FGM procedures are usually conducted by a physician, midwife or traditional practitioner with little medical knowledge. Complications are common and often deadly.

In cases where the cut is virtually unnoticeable, girls can grow up without ever realizing what was done to them. In other cases, women are left unable to feel sexual pleasure or bear children. Some experience crippling pain during sex.

In the Michigan case, the doctor claimed she merely wiped away a mucous membrane from the girls’ clitorises. But medical examiners say the victims showed “abnormal” genitalia, including scar tissue, small lacerations, “altered” labia and an incision. And other women from the Bohra community say cutting, usually at the age of 7, is common. “None of us remember being ‘wiped,’” writes journalist Tasneem Raja, who was raised in a Bohra family and was subjected to FGM when she was about 7. “We were cut. Some of us bled and ached for days, and some walked away with lifelong physical damage.”

I can’t imagine — why would people would subject their daughters to FGM?

Join the club. The reasons people cite are varied, but it’s generally related to controlling female sexuality — if it hurts or she can’t feel pleasure, she won’t seek out extramarital sex — and maintaining purity for marriage. And to be fair, many women willingly participate in the procedure.

Among Bohras and some other groups, FGM can also be about removing “bad germs.” It can also be about beauty: Some believe it produces a desirable smoothness of the genitalia. But more than that, it’s simply a long-standing tradition. However painful and dangerous, social pressure is real. When FGM is near universal in a community, a girl’s future marriageability depends on her being cut.

When did FGM begin? Is it a Muslim practice?

Researchers have theorized that cutting “might have been practiced in ancient Egypt as a sign of distinction, while others hypothesize its origin in ancient Greece, Rome, Pre-Islamic Arabia and the Tsarist Russian Federation.” Herodotus wrote about FGM in Egypt back in the fifth century B.C.

Although there is no mention of cutting girls’ genitalia in the Quran, some Muslim communities do promote FGM on religious grounds. “In some schools of jurisprudence it’s considered widely acceptable,” Saraswati said, referring to the Islamic law traditions that dominate in different Muslim societies.

“So in Indonesia, because of the school of thought there, the practice is pervasive,” she said.

Muslim supporters of FGM often cite a hadith, or saying of the Prophet Muhammad, that can be interpreted as allowing cutting, Qasim Rashid writes in his book “Extremist.” But, he says, it is one of many hadith whose authenticity is in doubt.

FGM has also been roundly denounced by Muslim leaders and scholars — including the dean of Egypt’s influential Al-Azhar University. A 2011 United Nations report states that over 4,100 religious leaders have taught followers that FGM is not sanctioned by Islam, and nearly 1,000 religious edicts called on Muslims to end cutting.

Still, in Egypt, upward of 90 percent of women aged 15-49 have undergone FGM, which was outlawed in 2009 — but Coptic Christians and Muslims are said to practice it at about equal rates. In other Muslim-majority countries, such as Saudi Arabia and Pakistan, FGM is virtually nonexistent.

FGM doesn’t happen often in the US, right?

According to the World Health Organization, FGM has been documented in 30 countries, mainly in Africa, the Middle East and Asia. “There’s a stereotype that FGM happens just on the African continent,” Saraswati said. “But it’s actually part of the birthing procedure in regions around the world. So FGM is actually something that’s growing.”

In the U.S., the Centers for Disease Control estimates at least half a million women and girls are at risk of FGM. This number may be an overestimate: It’s based on immigration from countries where cutting is practiced. But two years ago, researchers found that FGM rates in the U.S. had doubled in the past decade.