The Bronx Household of Faith rents space from a New York City public school and holds worship on Sundays when the building is empty. But if the New York City school board had its way, the building would stay empty, a scenario it prefers to allowing worship services.

This dispute has been going on for nearly 20 years. Alliance Defending Freedom (ADF) attorney Jordan Lorence and others on the ADF team have run interference with the courts to keep the churches open. On Wednesday, Lorence filed his third appeal with the U.S. Supreme Court asking the justices to affirm once and for all the right of city churches serving low-income neighbors to continue their work. I talked with him about the status of the legal battle.

These churches have operated in legal limbo for many years and have been on the verge of eviction several times lately. What’s the status right now?
We’re making our third appeal to the United States Supreme Court in this case involving whether churches and other religious groups can meet in vacant public schools on the weekends and weeknights to hold worship services. New York City bans that under policy, but Alliance Defending Freedom has been able to keep a court injunction in effect since 2002, so churches and other religious groups have been allowed to meet. We had that overturned in April. We have a temporary stay in effect so the churches can remain meeting in the schools, but we really need the Supreme Court to step in and overrule this blatantly wrong decision that says a policy [stating] everybody but religious groups can meet here is OK under the Constitution. That’s really wrong.

The last time you and I talked about this, you said Mayor Bill DeBlasio had indicated he opposed that public school policy. Where is Mayor DeBlasio on this now?
During the campaign for mayor, he kept repeating comments that he thought the policy banning worship services was wrong and would repeal it. When the decision upholding the policy came out in April, which meant that the mayor would have the authority to kick out the churches, he said that he thought the decision was wrong, that the policy should be overturned. He said it repeatedly at several news conferences. So far he has not taken any action. Perhaps he’s waiting to see what will happen with the U.S. Supreme Court, which is fine with me because I would like to see the bad decision by the federal appeals court overturned. We may come down to, if the Supreme Court denies review, asking the mayor to uphold what he said he was going to do during the campaign and get rid of this policy.

Did Alliance Defending Freedom’s victory in the Town of Greece case, in which the Supreme Court approved the practice of opening town council meetings with a prayer, set a precedent that may be helpful to you in this appeal for Bronx Household of Faith?
There’s one aspect of the Town of Greece prayer case that is helpful—that they relied upon the historic precedent of, what did the founders do? In our case, we have Congress and the early presidents, including Thomas Jefferson, allowing churches to meet in public, governmental buildings. From the beginning of the republic until just after the Civil War, there were churches that met in the U.S. Capitol building. … Equal access was clearly something that the founders practiced and saw as absolutely no big deal. 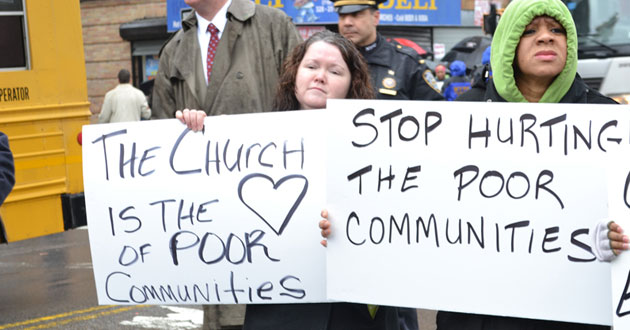