‘The Silencing’ | Kirsten Powers stands up and speaks out

Home » ‘The Silencing’ | Kirsten Powers stands up and speaks out

Open debate, tolerance and honest disagreement are under attack. There’s a reason for that, and one voice on the left has had enough.

My friend Kirsten Powers is looking for a fight.

Let me explain. Kirsten, a popular Fox News contributor and USA Today columnist, has just released a new book called “The Silencing: How the Left Is Killing Free Speech.” The intriguing thing here is that Kirsten herself is a lifelong member of the left. But it bothers her that many of her fellow liberals these days would rather force conservatives to shut up than actually have an open debate with them.

Kirsten has always believed, as she writes in her book, that “the fundamental liberal values” include “free speech, debate, and dissent.” And that’s what I meant by “looking for a fight.” She believes, and I agree with her, that it’s better to have a good, substantive argument out in the open than to simply try to silence one’s opponent. 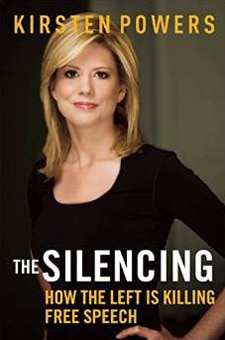 But as she documents in “The Silencing,” there’s a new breed of liberals taking over—a breed that she herself dubs “the illiberal left”—and these people are all about the silencing.

The illiberal left wants journalists fired for not holding the “correct” positions on hot-button social issues. They complain of feeling unsafe and uncomfortable in class if their professors teach the wrong authors or use the wrong phrases. They charge all same-sex marriage opponents with bigotry and try to shut down their businesses. They claim that pro-life women aren’t really “women” at all, and can’t be trusted to vote the right way on “women’s issues” or anything else.

In short, the illiberal left’s answer to everything that doesn’t fit their narrow worldview is “Shut up.” Demonization and dehumanization are their tools, and they wield them every chance they get.

As Kirsten herself told me when I interviewed her on “The Eric Metaxas Show,” she started to notice this pattern while doing research for her columns at USA Today. She’s come under attack herself, just for working at Fox News, even though she continues to represent a liberal point of view there. (“Guilt by association” is another favorite technique with the illiberal left.)

But as Kirsten told me, this isn’t about her. She’s more concerned about what’s happening on a national level, to all the people who don’t have access to the outlets that she has and are easy to silence before they ever even get a chance to speak. It’s on their behalf that she’s speaking out.

As Kirsten writes, “Debate and persuasion should be the default response when someone encounters a person who does not share their view, not demands that the other person change their position or be pushed to the margins of polite society.”

Amen. I’m deeply grateful for her honesty and integrity in standing up to those on her own side and insisting on fair treatment of those they disagree with.

And I especially like her proposed solution to the problem of misunderstanding and intolerance: “We should all make efforts to invite people who hold different views into our worlds. . . . Now, go make some unlikely friends.”

The Collapse of Evangelicalism?