The prophetic voice of Chuck Colson

A new book, which is landing in bookstores today, warns that we are headed for a new Dark Ages. “Persecution [is] coming to the church soon,” the author warns. “It’s going to happen as a result of conflicts over sex.” He predicts that “the break in the wall is the tax exemption” churches now enjoy. If churches refuse to “marry” homosexual couples, they will lose their exemption.

Who is the author of these predictions? None other than Chuck Colson, who went home to the Lord more than three years ago. That’s three years before the Supreme Court legalized same-sex “marriage”—something biologically impossible, by the way.

The book is titled “My Final Word: Holding Tight to the Issues that Matter Most.” It’s a collection of never-before published memos that Chuck sent to his writing staff, reporters, even presidential candidates who wanted his advice. And as the examples I just cited illustrates, Chuck’s writings are incredibly prophetic. 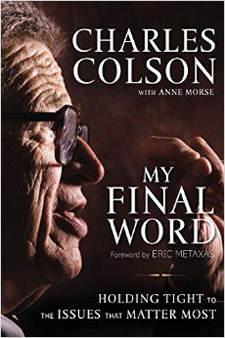 Chuck read widely and had conversations with experts on many subjects. He also had an ability to look at the past and analyze current events in order to predict what was coming. For instance, he notes in one memo that “the entire sixties movement for personal autonomy was over sex.” He quotes Phillip Johnson, who, Chuck writes, argued “that the entire culture war is rooted in sex, and that the destruction of the rule of law itself is traceable to the desire for total sexual freedom.”

A string of Supreme Court decisions provides all the proof we need of our culture’s obsession with sexual freedom: Roe v. Wade, Casey v. Planned Parenthood, Romer v. Evans, and now, of course, Obergefell v. Hodges. All reflect the elevation of sexual freedom and personal autonomy above all other rights—including freedom of speech and freedom of religion.

Chuck urged Christians to keep fighting to protect genuine marriage, but he knew the Supreme Court was quite capable of doing what it did in Roe v. Wade: ignoring the Constitution and simply imposing its own opinion about marriage on the entire country.

If that happened, he predicted, our religious liberties would be in the crossfire. As he asked in a memo to one of his writers, “Are [churches] going to be required to perform gay ‘marriages’ when the court rules that marriage is an inherent civil right?” He also pointed out that in Canada and Denmark, “preaching against homosexuality is already a crime.” And in America, he predicted that Christian ministries would be denied federal funds if they refused to hire practicing homosexuals.

What to do about this? Chuck—a former Marine who was known as the toughest of the tough guys in the Nixon White House—did not waver when it came to combating the coming assaults on religious freedom. “We fight every inch of the way,” he writes. “We’re certainly not going to conform—Lord help us! … The church will have to hold its ground and refuse to knuckle under.”

But, Chuck adds, “We must also prepare ourselves by discipling people to be courageous about proclaiming their faith.” Chuck reminds us of what happened when the German Church gave in to Nazi demands. “It gave Hitler the power he needed. The Barmen Declaration came too late to stop him.”

Having worked for Chuck and having received my share of memos from him, I’m telling you, reading this book is like having him back with us. I hope you’ll go to the online bookstore at BreakPoint.org and get yourself and your friends a copy or two of Chuck’s new book, “My Final Word.” You’ll learn what Chuck had to say about the future of bio-ethics, Islam, persecution, judicial usurpation, and many other issues we’re facing today.

And then you, too, will understand why the church is facing a new Dark Ages—and, more importantly, what we can do about it.

True Thanksgiving: What are we teaching our kids?