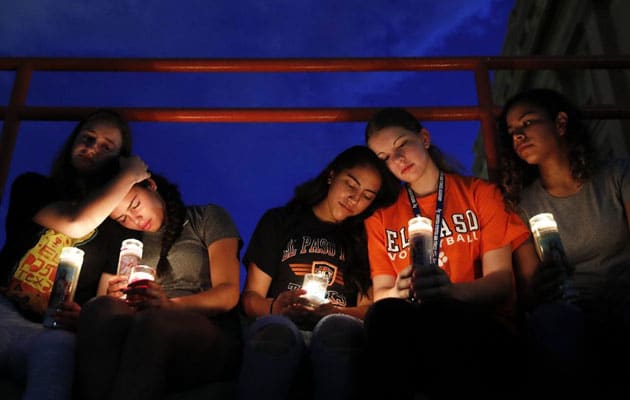 Like it or not, we will face evil in our lives. It has been with us since the fall of mankind, described in the Biblical account of Adam, Eve, and the serpent in the Garden of Eden. Evil manifests itself in a variety of ways, sometimes with subtlety, sometimes in your face. In the Garden of Eden, it is subtle, and even attractive, appealing to our most base instincts. The serpent promises that Adam and Eve can “be like God” (Gen. 3:5). However, they already were like God, being made in His image (Gen. 1:26-27).

The recent violence against worshippers, and the spate of mass shootings over the last several years, is the more “in your face”, overt and easy to recognize evil. As when dealing with any spiritual topic, particular the realm of spiritual conflict or spiritual warfare (Good vs. Evil), the scriptural admonition is to arm oneself with spiritual weapons. There is also good scriptural precedent for practical, temporal preparation, with physical weapons. Think of Nehemiah arming the workers during the reconstruction of Jerusalem (Nehemiah 4:13-18), and King David’s contest with Goliath (I Samuel 17:40). So, it is not either-or, but both.

So, it is with the inevitable. Confronting evil in this life is inevitable. If you perceive otherwise your reality is distorted, and you will be unable to prepare for the inevitable. The parishioners in Texas had no such illusion. Their correct perception of evil and subsequent preparation allowed them to confront and neutralize evil, saving many lives. When politically motivated gun-control activists endorse the removal of all firearms from a people who are well prepared for the proper use of them, they are operating in a false reality. They view guns as evil. If guns were not available, then other instruments (like knives or machetes) would be substituted, as we saw with the attacks on the New York Jews, or the massacre of Christians in Nigeria. Evil is real. Evil has many instruments of destruction.

President Trump is not is need of a reality check or a perception adjustment. Thank goodness that he sees evil for what it is and supports the effective preparation and tools to deal with it, including supporting religious liberty and the Second Amendment. His response to the evil that the terrorist Iranian General Soleimani represented and the wicked deeds that General Soleimani visited upon our fellow Americans are witness to that clear and correct focus. No doubt someone will blame President Trump for these church attacks and/or for starting a war by taking decisive action to remove a terror threat. But he understands that you can prepare for the inevitable, or not prepare for the inevitable, but the inevitable is inevitable.

Sometimes evil is perceived, but not reality. However, until perception is changed, the incorrect perception becomes reality. Let me illustrate. I have been involved with international medical relief work over the last 20 years. This experience has been in extreme cross-cultural contexts and has included work in the Asian Disaster theaters. Some of this work was in a fundamentalist Islamic area of the Indonesian tsunami, an area patrolled by Sharia Police. Although I was leading a Christian faith-based medical relief team that was providing critically needed medical care, we were viewed with great suspicion and as evil, merely because we were Christian. The first patient that we attended in a remote tribal area, was an elderly woman with a badly displaced femur fracture that was becoming infected. Her house had fallen on her in the tsunami. We needed to take her to a hospital three hours away, but her husband and adult son initially refused, relenting only with the realization that she would die without such referral.

So, we transported the three of them to the closest hospital. That night they were lodge in our guesthouse in the city. We served them chicken satay but they wouldn’t eat it. “It’s pork isn’t it?”, they said. “No, it’s chicken”, we said. Finally, their hunger won over and they ate it realizing it indeed was chicken. The next day the old lady had her life-saving surgery, which we paid for. During her recovery, her son, a very religious young man, engaged us in a spiritual discussion, and in a way that allowed us to show him God’s progressive revelation of his character through the Holy Scriptures, not violating Sharia.

By being there, and putting our giftedness at God’s disposal, this young man’s perception changed. His reality changed. God changed his reality and allowed him and his family to experience the blessing that God had intended him to receive. Evil was confronted in a way that effectively dealt with it. So, it was in the Texas Church shootings; and so it was in the decisive action that President Trump took in eliminating a substantial security threat that Iranian General Soleimani represented. Confronting evil is inevitable. Thus, our response needs to be informed by unflawed reality.

Dr. Mark Bruce is an emergency room physician and the Ambassador to Belize and Canada for the American College of Emergency Physicians. His most recent book is ‘Jackie, a Boy and a Dog: A Warm Cold War Story’, about how First Lady Jackie Kennedy gave him a puppy when his died.

The views and opinions expressed are those of the authors and do not necessarily reflect the official policy or position of the Christian News Journal. Any content provided by our bloggers or authors are of their opinion and are not intended to malign any religion, ethnic group, club, organization, company, individual or anyone or anything.