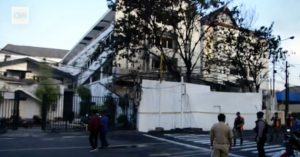 Islamic extremists in Indonesia, including a family of suicide bombers that targeted three churches, launched multiple attacks beginning Mother’s Day that reportedly killed at least 25 people. East Java police told reporters today (May 14) that 13 of the 25 dead were the assailants, according to the Jakarta Post. The