A swastika was founded Sunday night (Nov. 18) on a mural at Duke University remembering the victims of the deadliest attack in American Jewish history.

In a letter to the school community, university president Vincent Price condemned the act against a memorial for the 11 Jewish worshippers shot dead last month at Tree of Life Synagogue.

“That such a craven and cowardly act of vandalism—a desecration of a memorial to individuals who were killed because they were Jewish and practicing their faith—should happen anywhere is extremely distressing,” he wrote. “That it should occur in such a visible, public location at Duke should be a matter of grave concern to us all.”

He added, “To our Jewish students, faculty, staff and neighbors—and indeed, every member of our university community—I pledge that Duke will do whatever we can to protect your safety.”

Rabbi Nossen Fellig, co-director of the Chabad Jewish Student Center at Duke University Undergrads, said: “The people who committed these acts did so in order to spread hate and to make Jewish students feel unwelcome and unsafe on campus. I believe that it is particularly significant that this incident took place just weeks before the Chanukah season, when Jews around the world recall the Jewish victory over a regime that sought to persecute and tarnish the Jewish way of life 2,100 years ago.”

“The free speech tunnel that recently bore a message of love, of peace and of unity following the Tree of Life attacks in Pittsburgh was defaced with a swastika,” they posted on Facebook. “Someone deliberately took a can of spray paint to an area that they knew would be incredibly hurtful to the Duke Jewish community. This act was not just hateful, it was an intentional violation of a space that had been, in many ways, consecrated by our Jewish community.”

This is not the first swastika-related incident at the school.

A swastika-carved pumpkin was found earlier this month near a dormitory on campus. At the same time, fliers with the words “it’s okay to be white” were discovered. 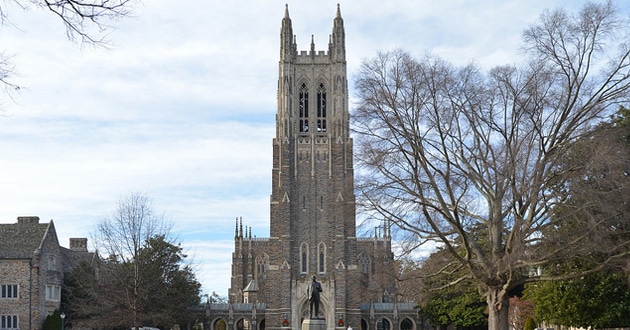