Americans with evangelical beliefs share a great deal in common. They trust in Jesus alone, evangelize their neighbors and believe the Bible is the final authority in their lives.

But when it comes to voting, race and political affiliation still divide evangelicals, according to a survey from LifeWay Research taken from Sept. 27 to Oct. 1, before the second presidential debate.

Overall, fewer than half (45 percent) of those with evangelical beliefs planned to vote for Donald Trump, according to the survey. A third (31 percent) said they would vote for Hillary Clinton. Fifteen percent were undecided. One in 10 (9 percent) supported a third-party candidate. 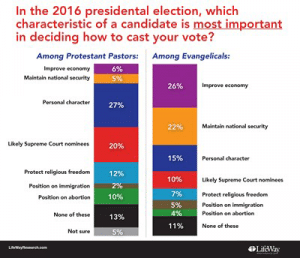 Scott McConnell, executive director of LifeWay Research, said the divides among evangelicals will remain regardless of twists and turns in the election season.

“This group of Christians shares the same core beliefs — but they don’t vote the same way,” McConnell said. “There are significant cultural and political divides among evangelicals that will remain long after the election is over.”

The online survey asked 1,000 representative Americans four questions about core evangelical beliefs — the Bible, the crucifixion of Jesus, salvation and evangelism. Those who strongly agreed with all four (17 percent) qualified as having evangelical beliefs.

The idea is to define evangelicals by belief rather than self-identified religious affiliation, McConnell said.

“The evangelical label has picked up political and social overtones that mask any patterns that are actually tied to evangelical religious beliefs,” he said.

As part of the survey, researchers looked at how people with evangelical beliefs and churchgoers see the issues at play in the 2016 election. Topics like personal character, abortion and religious liberty — often identified as key evangelical issues — matter less in this election. Other pragmatic concerns like the economy and national security are more influential.

“For churchgoers and those with evangelical beliefs, their pocketbook and personal safety are paramount,” McConnell said. “Moral issues aren’t a priority for many of them.”

Self-identified Christians who go to church at least once a month favored Trump (41 percent). A third (34 percent) planned to vote for Clinton. Eighteen percent were undecided. Six percent supported a third-party candidate.

A previous LifeWay Research poll of Protestant pastors found that most clergy don’t expect Christians to vote the same way. Two-thirds (65 percent) disagreed with the statement, “Christians who truly vote their conscience will vote for the same candidate.” Less than a third (29 percent) agreed. Six percent were not sure.

McConnell said neither major party in the United States has a monopoly on biblical values. So it’s no surprise, he said, that evangelicals who value the Bible will vote differently.

“Until one party or one candidate embodies everything that evangelicals believe, there is no reason to expect them to vote the same way,” he said.

Still, McConnell worries that the polarizing rhetoric of the 2016 election will spill over into churches. The Christian faith is supposed to unite people “from every nation, tribe, people, and language around Jesus Christ, not a politician,” said McConnell, citing the New Testament book of Revelation.