Most Americans believe in heaven, hell and a few old-fashioned heresies.

Those are among the findings of a new study of American views about Christian theology from Nashville-based LifeWay Research.

Americans also disagree about mixing religion and politics and about the Bible. And few pay much heed to their pastor’s sermons or see themselves as sinners, according to the online survey of 3,000 Americans commissioned by Orlando-based Ligonier Ministries.

Ligonier founder and chairman R.C. Sproul noted, “What comes screaming through this survey is the pervasive influence of humanism.”

Researchers asked 43 questions about faith, covering topics from sin and salvation to the Bible and the afterlife. They wanted to know how people in the pews — and people on the street — understand theology.

Many Americans get the basics right but are often fuzzy on the details, said Ed Stetzer, executive director of LifeWay Research.

“People like to believe in a generic Christian-ish god with cafeteria doctrines,” Stetzer said. “However, when we asked about harder beliefs — things that the church has [considered] and still considers orthodoxy — the numbers shift.”

Among the study’s findings:

Two thirds (67 percent) of Americans believe heaven is a real place, according to the survey. That includes, following standard demographic categories, 9 in 10 Black Protestants (88 percent) and evangelicals (90 percent), three-fourths of Catholics (75 percent) as well as a third of non-Christians (37 percent).

Just under half of Americans (45 percent) say there are many ways to heaven — which conflicts with traditional views about salvation being linked to faith in Jesus. 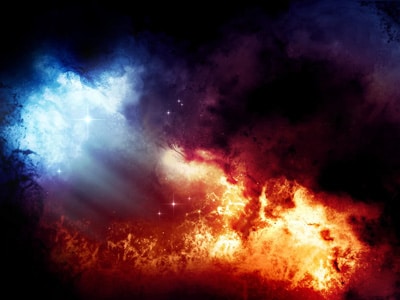 Overall, Americans don’t seem too worried about sin or being sent to hell. Two-thirds (67 percent) told researchers that most people are basically good, even though everyone sins a little bit — an optimistic view of human nature at odds with traditional teaching about human sin.

Fewer than 1 in 5 Americans (18 percent) say even small sins should lead to damnation, while about half (55 percent) say God has a wrathful side.

Most Americans (71 percent), and in particular Black Protestants (82 percent) and Catholics (87 percent), say people must contribute some effort toward their own salvation, the survey found. Two thirds (64 percent) say in order to find peace with God, people have to take the first step, and then God responds to them with grace.

That sounds right to many people, Stetzer said, especially in our “pull yourself up by your bootstraps” culture. But, he noted, it doesn’t reflect the Christian idea that faith is a response to God’s grace.

Many Americans also don’t mind being disconnected from a local church. About half (52 percent) say worshipping alone or with family is as good as going to church.

About 4 in 5 respondents (82 percent) say their local church has no authority to “declare that I am not a Christian,” according to the survey. More than half (56 percent) believe their pastor’s sermons have no authority in their life, while slightly less than half (45 percent) say the Bible was written for each person to interpret as they choose.

About 7 in 10 (71 percent) Americans believe in the Trinity. That’s the idea that one God exists as three persons: Father, Son and Holy Spirit.

About 4 in 10 (42 percent) Americans — and more than half (55 percent) of non-Christians — say churches should remain silent about politics.

The study’s overall results, Nichols said, show churches have a lot of work to do.

“This study demonstrates the stunning gap in theological awareness throughout our nation, in our neighborhoods, and even in the seat next to us at church,” Nichols said.

Methodology: A demographically balanced online panel was used for interviewing American adults. Three thousand surveys were completed from Feb. 25 — March 5, 2014. The sample provides 95 percent confidence that the sampling error from the online panel does not exceed plus 1.8 percent. Margins of error are higher in subgroups. Slight weights were used to balance religion and gender and remove constant raters.

Opinion: Will I Be Fat in Heaven?

It’s Real – Heaven, Jesus, and Tina Hines’ Return to Tell About It

If Conversion Therapy Is Bad, Why Is Sex Reassignment Good?

What Is the Rapture and When Will It Happen?

A Lack of Judgment? Why Hell Still Belongs in a Christian Worldview

The True Dangers of Sexting | Tweens and Teens

The search for the Christmas star

On God and the Bible, Americans are all over the map