U.S. Supreme Court Justice Anthony Kennedy has announced his retirement effective July 31, ending 30 years of service that began with his 1988 confirmation in the Ronald Reagan administration.

Kennedy’s resignation opens a second seat for President Donald Trump to fill. In 2017, Congress amended rules to allow confirmation of justices by a simple majority vote, enabling the appointment of Justice Neil Gorsuch.

Trump announced he would nominate a replacement from a standing list of 25 possibilities, presumably the list he published in November 2017.

Ethicist Russell Moore noted the gravity of the upcoming appointment.

“This vacancy on our nation’s highest court is a critical one,” said Moore, president of the Ethics and Religious Liberty Commission. 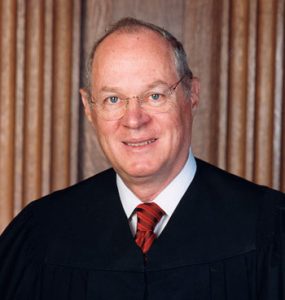 “As Justice Anthony Kennedy leaves the bench, he leaves what I see to be a mixed legacy. On the one hand, he was an important voice on high-profile cases involving religious liberty and free speech. But at the same time, he persistently denied justice to unborn children and authored the disastrous Obergefell decision.

Kennedy was in the 5-4 majority that decided in the 2015 decision Obergefell v. Hodges, which legalized same-sex marriage nationwide. Kennedy authored the majority opinion.

“I’m praying that the next associate justice will be fully committed to life, family, religious liberty, and human dignity,” Moore said.

Kennedy, the court’s longest serving member, was considered a moderate voice. He supported same-sex marriage on one hand while protecting religious liberties on the other.

“It has been the greatest honor and privilege to serve our nation in the federal judiciary for 43 years, 30 of those on the Supreme Court,” Kennedy said in a statement at the close of the court’s term, indicating a desire to spend more time with his family. Kennedy turns 82 in July and was the oldest justice behind 85-year-old Ruth Bader Ginsburg.

Jerry Johnson, president of National Religious Broadcasters, joined many in noting the importance of Kennedy’s replacement.

“This week’s 5-4 decisions are a vivid reminder that we must have Supreme Court justices who honor the values of life and liberty at the very core of our Republic,” Johnson said in a press release.

“Free speech and religious liberty hang in the balance, and those values would have suffered dearly if Justice Gorsuch had not been on the bench. I urge President Trump to nominate a Constitution-honoring individual in the mold of Justice Scalia once again, and for the Senate to confirm him or her quickly,” he said.

“He deeply disappointed many Americans with his constitutional jurisprudence favoring abortion and same-sex marriage,” Farris said in a statement shortly after Kennedy’s announcement. “But we also praise Justice Kennedy’s insight and forceful celebration of First Amendment freedoms, his sensitivity to the danger of authoritarian government, and his refreshing desire to preserve and teach the necessity of freedom of speech to future generations.”

During the most recent Supreme Court term, Kennedy wrote the majority 7-2 opinion in favor of Colorado Christian baker Jack Phillips, who refused to design a wedding cake for a same-sex wedding.

— by Diana Chandler | BP
CNJ staff contributed to this report

What Happens if Texas Wins at the Supreme Court?

It’s Not Over: Dems Plot to Impeach Amy Coney Barrett if She Will Not Recuse Herself From Election Cases