Sex trafficking demand increases when large crowds gather for such events as the Super Bowl, an advocacy group said in launching a Feb. 4 Twitter campaign to spread awareness of sexual exploitation.

While sex trafficking remains a crime that must be tackled all year round, the demand has been proven to increase at previous Super Bowls, the National Center on Sexual Exploitation (NCOSE) said in launching #TackleDemand. 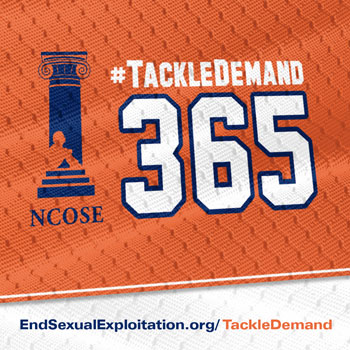 At the 2017 Super Bowl in Houston, 183 buyers of sex and nine sex traffickers were arrested, NCOSE said on its #TackleDemand website, endsexualexploitation.org/tackledemand.

The campaign will amplify its message through a Twitter Thunderclap, allowing participants to preschedule tweets to coincide with messages from other activists across the U.S., creating a “virtual flashmob.”

Through his Let My People Go ministry based in New York, Sadler empowers churches to fight human trafficking. He advises churches to begin by focusing on their neighbors.

“Identify those most vulnerable; those who traffickers are most likely to target,” Sadler said. “Talk to the experts in your community, like social services, law enforcement and local nonprofits. Finally, read and listen to survivors of sex and labor trafficking.”

Backpage.com shut down by feds over sex ads