Study: What are Americans thankful for?

Home » Study: What are Americans thankful for?

When Americans count their blessings at Thanksgiving, God will get most of the credit, a new study shows. And money might be the last thing on their minds.

Most Americans are thankful for family (88 percent), health (77 percent), personal freedom (72 percent) and friends (71 percent). Fewer give thanks for wealth (32 percent) or achievements (51 percent), the study shows.

“The blessings that matter most are the ones money can’t buy,” said Scott McConnell, executive director of LifeWay Research. 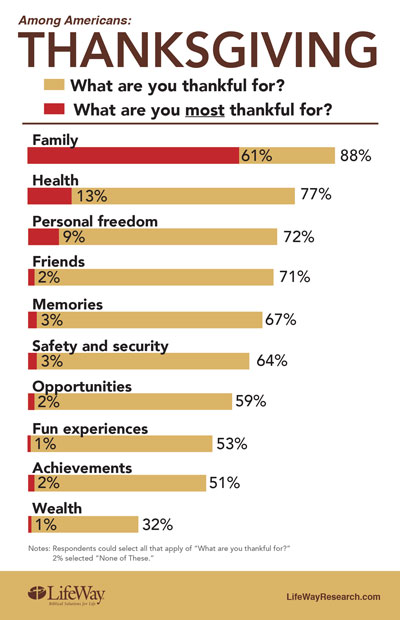 In a representative online survey of 1,000 Americans, researchers gave respondents 10 options to be thankful for — from family and health to achievements and wealth.

Their responses were shaped in part by demographics.

Overall, giving thanks seems alive and well in America, despite the stresses of the recent election season. Only 2 percent say they are thankful for none of the 10 options provided.

“Many Americans have felt discouraged about events of the past year,” McConnell said. “But they still find a lot to be thankful for.”

Americans have celebrated days of thanksgiving in the fall since 1621, when the Pilgrims at Plymouth Plantation held a feast at the end of their first harvest. In 1789, President George Washington set aside Nov. 26 of that year as a thanksgiving day in honor of “that great and glorious Being who is the beneficent Author of all the good that was, that is, or that will be.”

States celebrated Thanksgiving Day on different dates until 1863, when President Abraham Lincoln set aside the fourth Thursday of November as an official federal holiday. Lincoln credited God for the nation’s blessings: “They are the gracious gifts of the Most High God, who, while dealing with us in anger for our sins, hath nevertheless remembered mercy.”

Catholics (65 percent) are more likely to thank their family than Protestants (49 percent).

For more information on this study, visit LifeWayResearch.com or view the complete report PDF.

No American Is Alone As Long As We Are United!

Americans think people should be free to choose religious beliefs

Majority of Americans say best is yet to come