On God and the Bible, Americans are all over the map

Home » On God and the Bible, Americans are all over the map

Americans apparently don’t know much about theology, according to a study released today (Sept. 28). Most say God wrote the Bible. But they’re not sure everything in it is true.

Six in 10 say everyone eventually goes to heaven, but half say only those who believe in Jesus will be saved. And while 7 in 10 say there’s only one true God — Father, Son and Holy Spirit — two-thirds say God accepts worship of all faiths.

Those are among the findings of a survey of American views on Christian theology from LifeWay Research, who conducted the study April 14-20. 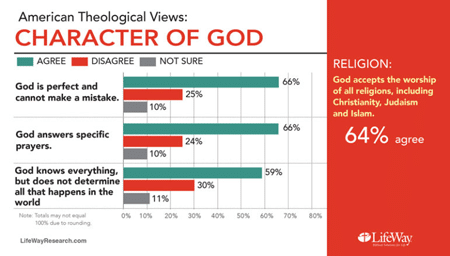 Scott McConnell, executive director of the evangelical research firm, says most Americans still identify as Christians. But they seem to be confused about some of the details of their faith.

For example, he said, about two-thirds of Americans believe Jesus is God while half say Jesus is a being created by God. Those two beliefs don’t seem to match, he said.

“Contradictory and incompatible beliefs are okay for most people,” McConnell said.

The online survey on theology was sponsored by Orlando-based Ligonier Ministries. Researchers asked 47 questions on topics from prayer and the Bible to heaven and hell.

Two-thirds of Americans (64 percent) say God accepts the worship of all religions, including Christianity, Judaism and Islam. Twenty-four percent disagree. Twelve percent are not sure.

Evangelical believers say hell is for real. Other Americans aren’t so sure.

Overall, fewer than half (40 percent) of Americans say those who don’t believe in Jesus will go to hell.

Many evangelical believers say everybody goes to heaven. They also believe that only those who trust Jesus as their Savior are saved.

Two-thirds of those with evangelical beliefs (64 percent) say heaven is a place where all people will ultimately be reunited with their loved ones.

Everybody sins but it’s no big deal.

Americans admit they aren’t perfect. But they give each other the benefit of the doubt. Two-thirds (65 percent) agree that everyone sins a little, but most people are good by nature. More than half (57 percent) say it would be fair for God to show His wrath against sin. But that wrath seems to be reserved only for the worst sinners.

Three-quarters (74 percent) of Americans disagree with the idea that even the smallest sin deserves eternal damnation. That includes almost two-thirds (62 percent) who strongly disagree.

The resurrection really happened. But not everything else in the Bible did.

More than half of Americans (58 percent) say God is the author of the Bible. About half say the Bible alone is the written Word of God (52 percent). Two-thirds of Americans (64 percent) say the biblical accounts of the physical (bodily) resurrection of Jesus are completely accurate. A quarter (23 percent) disagree. Thirteen percent are not sure. Almost all of those with evangelical beliefs (98 percent) agree, as do more than half of Americans who do not hold evangelical beliefs (56 percent).

Fewer than half of Americans (47 percent) say the Bible is 100 percent accurate in all it teaches. Forty-three percent disagree. Ten percent are not sure.

Americans believe in the Trinity. But it’s complicated.

Seven out of 10 Americans (69 percent) agree there is one true God in three persons: God the Father, God the Son and God the Holy Spirit. Six in 10 say Jesus is both divine and human (61 percent).

But they’re fuzzy on the details of the Trinity. More than half (52 percent) say Jesus is the first and greatest being created by God. And 56 percent say the Holy Spirit is a force rather than a person. The Holy Spirit seems to be particularly confusing: A quarter (28 percent) say the Spirit is a divine being but not equal to God the Father and Jesus. Half (51 percent) disagree. Twenty-one percent are not sure.

About half of Americans (49 percent) say sex outside of traditional marriage is a sin. Forty-four percent say it’s not a sin. Seven percent are not sure.

Forty-nine percent say abortion is a sin. Forty percent say it is not. Eleven percent are not sure. Almost 4 in 10 (38 percent) say gender identity is a matter of choice. Half (51 percent) disagree. One in 10 (11 percent) is not sure.

Three-quarters of Americans (77 percent) say people must contribute their own effort for personal salvation. Half of Americans (52 percent) say good deeds help them earn a spot in heaven. Sixty percent agree that Jesus Christ’s death on the cross is the only sacrifice that could remove the penalty of their sin.

Withholding communion is frowned upon.

Sixty-two percent of churchgoers disagree with the statement, “My local church has the authority to withhold the Lord’s Supper from me and exclude me from the fellowship of the church.” Twenty-nine percent agree. Nine percent are not sure.

Most Americans don’t buy the prosperity gospel — especially if they have money.

Two-thirds (63 percent) disagree with the idea that God will always reward true faith with material blessings. A quarter agree. Twelve percent are not sure.

Those with high school degrees or less (33 percent) are more likely to believe that God blesses the faithful with material blessings than those with graduate degrees (18 percent).

McConnell said Christian theology is both simple and complicated. Most Americans agree with simple truths like “Jesus arose” and “Jesus saves,” he said, but few believe they need saving or they are not good by nature.

“Basic Christian theology is easy to find on a church’s beliefs webpage, yet most Americans don’t understand how the pieces are related,” he said.

Methodology: A demographically balanced online panel was used for interviewing American adults. Three thousand surveys were completed from April 14-20. The sample provides 95 percent confidence that the sampling error from the online panel does not exceed plus or minus two percent. Margins of error are higher in subgroups. Slight weights were used to balance gender, age, ethnicity, income, region and religion.