The “Return to the Hiding Place” film about the underground teenage army that helped Corrie ten Boom save the lives of Jews during the Holocaust is aptly released as anti-Semitism is rising globally and on college campuses, the movie’s director said.

The independent film comes more than 70 years after six million Jews were killed in the Holocaust, but Jews still face the persecution and hatred of anti-Semitism, according to research and news reports.

Director Peter Spencer said the film’s release is for such a time as this.

“I believe God timed this film for now to bring attention to the plight of believers in the Middle East and the church kind of being asleep at the wheel,” said Spencer. “I’m encouraging pastors to let the truth be known as to what is happening to believers.”

Spencer is promoting the film as an evangelistic outreach to churches and especially youth. He said many young people are often so moved at the film’s end that they offer to start college-based prayer groups and Bible studies, and to educate themselves about the persecution of Christians and Jews.

“I’m encouraging pastors to let the truth be known as to what is happening to believers,” Spencer said. “Anti-Semitism is growing in colleges because the Left and extremists know if you can get young people believing something in college, they’ll carry it their lives through. And right now the anti-Semitism is stronger than it’s ever been … for many, many years.

“People have forgotten about the Holocaust,” Spencer said. “This film is to remind people ‘never again.’ We will not as a people sit idly by and watch the body of Christ, our family, be liquidated. We will not watch God’s children in Israel be liquidated.”

Return to the Hiding Place is based on the book and personal accounts of Hans Poley, a Dutch Christian physics student who dropped out of college after refusing to fight for the Nazis and was the first person sheltered in the ten Boom home during WWII. He helped lead a group of students, some as young as 13, who spied on the Nazi army and saved nearly 800 Jews from capture with the help of the ten Boom family.

“This is a film literally about life,” Spencer said. “It’s about protecting innocent life.”

It was at a pro-life debate 19 years ago comparing abortion to the Holocaust that Spencer met Poley, who told him about his activities in Holland during WWII. Before his death, Poley gave Spencer rights to his book and other stories of the underground youth army’s activities.

The movie presents ten Boom’s army as teenagers who became Christocentric, sacrificing their lives for total strangers, and exhibiting maturity Spencer said is rarely found among youth today. Spencer seeks to portray the danger the teenagers faced daily, knowing they could be tortured and killed at any moment.

“We have been seduced by this culture of self,” Spencer said, “and what it takes for us to get the Gospel to the world and to change the way the world is determining, unfortunately, the outcome of our lives, is [to] empty ourselves of self and become Christ-centric, and what I would call Christocentric. That is something those teenagers did, and it’s incredible.”

While Poley survived the war, others in ten Boom’s group did not, and their deaths are portrayed in the film. Spencer depicts the teens, untrained in military maneuvers or espionage, as simply moved by the Lord to get involved. 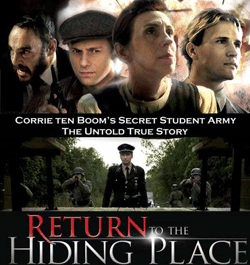 “We sometimes shrink the vision of God by being so focused just on our own little groups and the finances of our own little groups … that we lose the greatness of the body of Christ worldwide, and that’s why we don’t make decisions sensitive to the suffering body of Christ worldwide,” Spencer said. “So that drove me in this film, to once again bring attention to how God’s people suffered and what it took to stop that attack on God’s people, and we’re at that place again. We’re going to have to rise up and make a stand before it’s too late.”

Spencer believes Poley would be heartbroken at the rising tide of anti-Semitism in Europe, the Middle East, and on college campuses in the U.S. and elsewhere.

Skip Grinberg, chairman of the Community Relations Council of the Jewish Federation of Greater Pittsburgh, called the persecution of Jews in Europe epidemic.

“It has been 70 years since the liberation of the concentration camps. In today’s enlightened age, life should be different,” Grinberg wrote in a Feb. 28 editorial in the Pittsburg Tribune. “But, instead, we sadly find ourselves dealing with levels of anti-Semitism in Europe that are comparable to those of the 1930s. These efforts will encourage our lawmakers to work with their European counterparts and take steps to ensure that when we say ‘never again,’ we mean it.”

In the 2012 survey by the European Union Agency for Fundamental Rights (FRA), 66 percent considered anti-Semitism to be a problem in the countries surveyed, and 76 percent said anti-Semitism has worsened over the past five years in the countries where they live. The study included 5,900 self-identified Jewish people in Belgium, France, Germany, Hungary, Italy, Latvia, Sweden and the United Kingdom, countries that comprise an estimated 90 percent of the European Union’s Jewish population.

The study by Barry A. Kosmin and Ariela Keysarrom, conducted among 1,157 self-identified Jewish students at 55 universities and four-year colleges, defined anti-Semitism as “prejudice and/or discrimination against Jews, individually or collectively, that can be based on hatred against Jews because of their religion, their ethnicity, ancestry, or group membership.”

Return to the Hiding Place opened in select cities in March, and is expected to play in more than 650 cinemas nationwide in the coming months. The film is available for bookings at public cinemas and at churches capable of housing a viewing, Spencer said, through Sept. 1.

Groups can secure a booking of the film through the advance purchase of 500 tickets at http://rhptickets-com.3dcartstores.com/.

Among the film’s endorsers are evangelist Franklin Graham and the Holocaust Memorial in Israel.

How Would Biden Treat Israel, Iran, if He Wins?

New training grounds for the next generation of anti-semites

History can be offensive, but it shouldn’t be revised!