A prayer Michael Jr. uttered in advance of a stand-up comedy routine changed the Christian comedian’s perception of his purpose. Comedy is not about getting laughs, he noted, but it’s about giving.

The epiphany a decade ago in Los Angeles opened for Michael Jr. a world of volunteerism and ministry alongside comedy that birthed the one-night-only film “More Than Funny,” showing in 600 U.S. theaters Oct. 18.

More Than Funny calls on audiences to meet the overlooked needs of others in their own communities, using God-given gifts Michael Jr. calls “set ups” to supply others’ needs with outreaches he calls “punchlines.”

“I feel like I’m supposed to make laughter commonplace in uncommon places. Like that’s my ‘punchline.’ That’s what I’m supposed to do,” said Michael Jr. “But … there’s a chef out there who’s amazing at cooking. … That’s your ‘set-up.’ … What if you took that skill to a homeless shelter once a quarter? … And then convince a supplier to use their ‘set up’ and now you cook a meal that a homeless person could never have imagined eating before.” 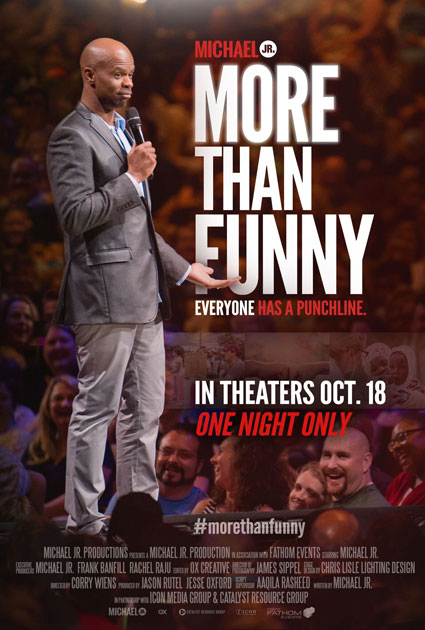 Such giving helps not only the receiver, Michael Jr. said, but also the giver or ‘punchliner.’ “It’s pretty awesome what takes place.”

At one comedy venue, Michael Jr. said, he felt compelled to call a Deaf woman on stage and inquire of her greatest need. With the help of sign language, she told him she and her husband needed a vacation, because their special needs child required constant care.

“They can’t afford a nurse who’s qualified to stay with the child,” he said, and had not taken a vacation in 13 years.

“So I turned to my audience and I said, ‘Where is the special needs nurse that can deliver the punchline?'” said Michael Jr. “You hear a voice come from the top balcony, and this lady says, ‘Here I am.’ And this lady comes walking down.'”

The nurse became the “punchline” the couple needed, providing respite care to allow the couple a break from their daily routine.

“Comedy opens up hearts, and if I can make a deposit and plant a seed, it’s going to grow,” Michael Jr. said. “And then some place, some church, some community will bear the fruit of what’s growing.

“I just want to be a good steward,” he said. “I want the churches to be good stewards of the fruit that’s going to come about from planting a seed in peoples’ hearts.”

Michael Jr. looks for ministry opportunities in every city his comedy takes him, performing free comedy skits at homeless shelters, prisons and similar venues. His More Than Funny tour, a series of live performances and ministry outreaches in 30 cities spanning February through December, bolsters the film.

“I’m able to go to these homeless shelters and prisons and inspire all of these people,” Michael Jr. said. “But what I’m looking forward to doing, is a big event on a Saturday or Friday for Christians and a lot of non-Christians, and then inviting them to the church on Sunday to hear some more funny, and the rest of my story.”

Fathom Events distributes the movie that was filmed before a live audience.

Tickets are available at MoreThanFunnyMovie.com.