Knowing God without knowing all of God

Home » Knowing God without knowing all of God

In the post-enlightenment western world we live by rules of science. Theories are posed, evidence is gathered, facts disputed, and in the end truth is discovered. At least truth about some things is discovered. But the model of scientific discovery simply does not apply to much of life. One of the not-so-subtle tenets of enlightenment thinking is the disregard for the supernatural and the subsequent magnification of mankind. Man has superseded deity as the primary force and value in the world. We can see this even in the gut reaction to the Bible’s stories of the supernatural. When we hear of demons and exorcisms they don’t seem present or real. They seem more like tales of dragons and ghouls and knights in shining armor. To put stock in such fanciful tales, according to many, has the same value (at best) as finding the morals in Grimm’s fairy tales.

To many modern thinkers, though, belief in God and a holding to religion is akin to intentional stupidity. It is built, they say, on tradition and custom taking hold of our minds and a refusal to think in any other direction. (In some cases they are correct, but that is hardly a fair characterization.) Because they cannot see God or plausible evidence of His being, to believe in Him is outright madness. To them, believing in God is like holding fast to the Easter Bunny or Santa Claus.

God does not fit the world as western thinkers have shaped it. He does not fit the processes and grids of theory, evidence, and proof. So He is relegated to those second tier statuses of religious tradition, personal values, and vague spirituality.

The God of the Bible, though, will not be relegated to anything. He is omnipotent creator of all, including all those who are doing the relegating. It’s important that we see Him as the God “of the Bible” too, because that is how He has chosen to explain and reveal Himself to us. If you are a Christian, what you know of God comes from the Bible; it is the breathed-out revelation from the heart of God to the hands of man.

What the Bible reveals of God is precisely what God wanted revealed of Himself, no more and no less. But it isn’t everything about Him. Scripture raises as many questions as it answers. It asks the impossible and describes the miraculous. The Bible tells stories that are grotesque and stories that are heart-warming. Parts of it are horrifying and others are befuddling. It is written in multiple genres and has thousands of characters. In short, it is representative of the real world and God’s relationship with it, not a book to simplify the world so we can understand it all. And it is just the way God wanted it.

This should tell us something both about God and about belief. God is infinite, beyond our understanding, and He chose to reveal Himself to us in a way that sparks questions rather than settling all of them. God did not want us to have easy instructions and simple answers. He didn’t want us to be able to understand Him so well that we can package him, wrap him, and put a bow on Him. (Of course many in the evangelical church do their best to accomplish just this. They want a God who can be understood in full and explained systematically. They fail to recognize the meaning of the terms “infinite” and “omnipotent.” God cannot be grasped, not in full, and that’s what makes Him God.) If we could do that what about Him would be worthy of worship? In fact, God could not do such a thing; He could not shrink himself, his profound and unfathomable self, to a size our human minds and hearts could grasp. He wanted us to search, to wrestle, to wonder, to be mystified. He wanted us to ask.

Piper blogs at The Blazing Center, is the author of Help My Unbelief: Why Doubt Is Not The Enemy Of Faith and co-hosts The Happy Rant podcast. Barnabas serves as the Brand Manager for the Leadership Development team at LifeWay Christian Resources in Nashville where he lives with his wife and two daughters. 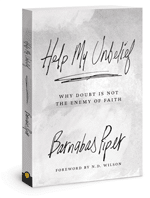 This article is an excerpt from Piper’s new book, Help My Unbelief: Why Doubt Is Not The Enemy Of Faith, released 7/1/15 from David C Cook.