When I interviewed veteran actor John Rhys-Davies at a film premiere recently, I already knew we had several things in common. We both understand some Swahili, studied at UK universities, and married older women. But I was not aware of his deep concerns about two significant social issues – slavery and anti-Semitism – that also ignite my passions.

Rhys-Davies, whose filmography credits are extensive, is best known for appearing in the Lord of the Rings trilogy and two Indiana Jones movies. On June 5, he’ll open in Beyond the Mask, a swashbuckling Revolutionary War-era action-adventure with a message. More on that role later.

Welsh-born Rhys-Davies grew up in Tanzania, for many years considered himself African, and speaks Swahili easily. My Swahili is, shall we say, much more limited. I can say Jambo (“Hello”) and Karibu (“Welcome”) to open speeches in Kenya. But some shared convictions reminded me how often childhood experience influences adult allegiance. 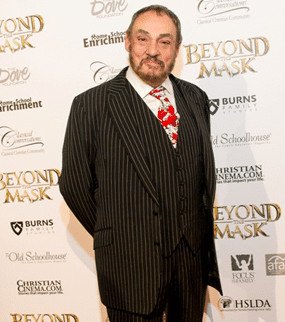 Rhys-Davies recalls his father, a colonial policeman, taking him to the Dar es Salaam docks and pointing out a Saudi trading ship that sailed to Mozambique and back twice annually: “It’s always got two or three little black boys…slaves [being taken] to Saudi Arabia. And the United Nations will not allow me to do anything about it.” The episode struck Rhys-Davies. “His palpable anger affected and infected me,” he tells me.

ISIS’ current justifications for slavery stick in his craw. “What a disappointing start to the 21st-Century: Slavery’s back,” his resonant voice drips with sarcasm. An agnostic, he’s emphatic that “It is Christianity that gets rid of slavery.” Shining light on slavery’s scourge and racism’s ugliness are personal passions of mine as well, rooted in my youth in the southern US.

In Return to the Hiding Place, Rhys-Davies played a Jewish cantor whom courageous Christians hid from Nazis during World War II. He’s said, “This film is critical for our culture today.” How so? Modern attempts at philosophical elasticity “are allowing anti-Semitism to reassert itself,” he responds. “That was the devil we really thought we had beaten,” but it’s back, and rampant.

I share his concern. My Miami grade school taught us both Hanukkah songs and Christmas carols. An ancient Israeli prophet said God considered Jews “the apple of His eye.”

As a young radical leftist, Rhys-Davies intended to heckle a conservative Member of Parliament at a local event. After hearing the MP’s reasoned, articulate, persuasive responses to his comrades, he decided to listen rather than heckle. He became a Tory. The MP was Margaret Thatcher.

Which returns me to Beyond the Mask. Rhys-Davies emphasizes his love for values like democracy, equality, rule of law and fair play. In this historical-fiction story, he plays Charles Kemp, a conniving, manipulative British mogul bent on snuffing the new American experiment. An assassin-turned-hero and his love seek to foil Kemp’s dastardly plots. In the process, they not only save George Washington’s life; they help save America.

Why did the British actor take this part? “I like independent films,” he explains, that “try and say something that a big studio won’t say or doesn’t say. I like adventure films.”

“I’m fascinated by that period of history. …You’ve got these giants of your founding fathers…Franklin, Jefferson, Madison, Washington…an extraordinary collection of thoughtful, pragmatic visionaries.”

Rhys-Davies is quite transparent about his complex relationship with his late wife, Susie. He regrets treating her unkindly, thinking “her increasingly irritating questioning and manner was just designed to drive me nuts.” Eventually – when she completely forgot their son was leaving for university in the US – he realized she had dementia, and changed his ways.

Convinced he’ll never forgive himself for his marital unkindness, he takes some solace that during her final decline with Alzheimer’s, he could offer her affection and the Lord’s Prayer and hold her hand when she died. This actor’s personal warmth and passion for social justice appear to flow from a genuinely compassionate heart…that didn’t seem an act to me.

Rated PG (USA) “for action, violence and some thematic elements”

‘Beyond The Mask’ breaks ground as faith-based action adventure