Indonesia’s religions and the ‘Gospel truth’

INDONESIA — Indonesians must declare which of the seven state-sanctioned religions they follow, but there appears to be a big difference between what they say and what they do.

While more Muslims live in Indonesia than in any other country in the world, it isn’t an Islamic state. Its 1945 constitution guarantees freedom of religion; however, Indonesians are required to declare which one of the state-recognized religions they follow so that it can be stated on their national ID card.

Originally, the five recognized religions were Islam, Catholicism, Protestantism, Buddhism and Hinduism. Confucianism was added later, and the Baha’i faith became the latest addition in 2014. 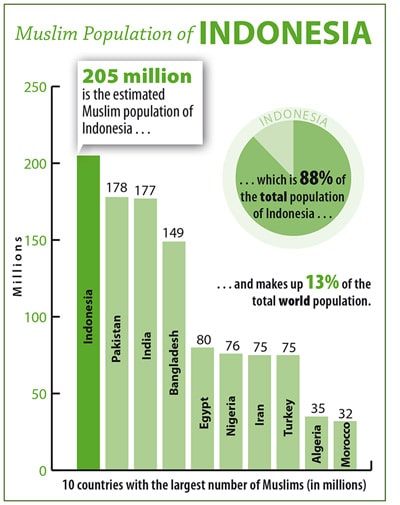 All seven religions came to the islands with influences from the outside. Hinduism and Buddhism arrived around the second and fourth centuries, largely from Indian and Chinese traders arriving in Sumatra, Java and Sulawesi. Both melded well with the animistic spirit worship already widely practiced in the islands.

Islam, brought by Muslim traders from South Asia, got a toehold in Sumatra in the 13th century and began its sweep of the islands, largely overrunning the widely practiced Hinduism.

Catholic missionaries followed the Portuguese to Indonesia when they got involved in the spice trade in the 16th century. In the 1600s, when the Dutch took over islands formerly held by the Portuguese, Catholics were forced to convert to Protestantism. According to the Encyclopedia of Christianity, the Dutch Reformed church started pastoral and missionary work in Dutch settlements during this time. In the 19th century, other European missionary societies founded congregations and institutions in Indonesia. American mission societies began work in the country in the late 19th and early 20th centuries.

Like Buddhism, Confucianism was brought to Indonesia by merchants and immigrants from mainland China, possibly as early as the third century. But it wasn’t until the 1900s that Confucianists formed an organization to promote their beliefs in Jakarta.

Baha’i, which was founded in Persia (Iran) in the 19th century, arrived in Indonesia in the 1920s and has existed as a religious movement since the 1970s, according to an August 2014 editorial in The Jakarta Post.

In spite of Hinduism’s proliferation of gods, it meets the Indonesian government’s criteria of “belief in the one and only God” to be a state-approved religion. The Bali Hindu Council claims that in the hierarchy of its gods, Sanghyang Widi Wasa — the supreme invisible being — is the “one supreme god.” They believe that other gods are forms that emanate from this supreme god.

While Hinduism was once widely practiced in Indonesia after being brought to the islands by Indian traders, it is now practiced only on the island of Bali and in a few other small pockets elsewhere. About 90 percent of Bali residents identify themselves as Hindu.

But Balinese Hinduism is distinct from the Indian Hinduism that inspired it centuries ago. It merges some Buddhist and animistic elements so that it is more concerned with local and ancestral spirits than the cycle of life, death and rebirth. Harmony and balance are important elements: the balance of good and evil, light and darkness, order and chaos.

Maintaining this balance is vital.

To the Balinese, mountains are holy, with the highest mountain on the island, Mount Agung, being the holiest. Orientation of physical structures toward holy places is important, especially for houses, temples and schools.

If a family has a temple, it “has to be at the point closest to the holy mountain,” International Mission Board worker Malcolm Turnow* said. “The head of the grandfather where he sleeps on the pillow has to be the next closest thing and on down through the family in importance to the youngest kids. The farthest from the holy mountain is your pigs, your trash, your kitchen.”

In Balinese Hinduism, there is a focus on art and ritual rather than scriptures, laws and beliefs. The most visible manifestation of this focus is offerings to the spirit world. Daily, women of the household present spirits with carefully crafted palm leaf trays topped with flowers and betel as tokens of hospitality. They may contain other items such as rice, fruit, cookies, meat and vegetables, but they are always done in an artful manner. More elaborate offerings may be made for other occasions to express gratitude to the benevolent spirits or appease demons.

The offerings can be seen everywhere — placed at the entrances of roads, in front of houses, on counters in shops. It is a woman’s duty to learn the proper way to make offerings, and this skill is passed on from generation to generation. If anything bad befalls a family, the woman often is blamed for the misfortune, Turnow said. The family would tend to assume that the woman must have performed offerings incorrectly and angered the spirits.

Animism, the indigenous religion, still remains in many places, and there is a variegated effect among islanders asked to declare one of the state-sanctioned religions. Elizabeth Pisani, formerly a foreign correspondent for Reuters and author of “Indonesia Etc.: Exploring the Improbable Nation,” said when islanders are asked to pick their religion from the approved list, they often choose the religion that best fits their history and dietary traditions.

For instance, “no group that celebrates its true religion by feasting on pigs and cattle could be Muslim or Hindu,” she said, referencing the Marapu religion (a form of ancestor worship) in Sumba. Therefore, a Marapu’s ID would read “Kristen” for Protestant, though he or she is not truly a follower of Jesus.

According to a 2010 religion census in Indonesia, 87.18 percent of Indonesia’s population of 237.6 million people declared themselves as following Islam, 6.96 percent Christian-Protestant, 2.91 percent Christian-Catholic, 1.69 percent Hinduism, .72 percent Buddhism, .05 percent Confucianism, and .49 other, not stated or not asked.

Though these statistics point to a high adherence to the state-sanctioned religions, in practical everyday life, animism and belief in the power of good and evil spirits influence social behavior.

The reality is that “the No. 1 religion in Indonesia is animism: animistic Islam, animistic Catholicism, animistic Christianity, animistic Buddhism,” Turnow said. “That’s a hard thing for new [Christian] believers to overcome,” due to their fear of the spirit world, he added, “because that’s how they’ve grown up all their life.”

Nick Hall: Why One Million People Changed Their Religion in Two Hours

Racism and Religion: Sanctified Bigotry, or Unity and Diversity Solutions?

Americans’ Views of Life’s Meaning and Purpose Are Changing

Coronavirus: A Catalyst for a Shift in Christianity From Religion to Relationship