Now he hopes to do the same at Moody.

Last week, Jobe, 54, was announced as Moody’s 10th president. He plans to start in January.

Jobe’s arrival comes at a critical time for the school.

Their departures came as tensions between faculty and staff swirled. Concerns about theology, the school’s finances and its embrace of diversity lit up the internet.

Moody’s board of directors said there was no wrongdoing, but it cited “widespread concerns over the direction” of the historic Christian school in announcing the departure of the former top leaders.

It was “time for a new season of leadership” at Moody Bible Institute, according to Randy Fairfax, chair of Moody’s board of trustees.

“His clarity of vision, humble nature, passion, and strong track record of ministry growth will bring a palpable energy to the Moody family,” Fairfax said in a statement.

Jobe, who founded New Life Community Church as well as New Life Centers of Chicagoland, is no stranger to Moody.

He hosts “Straight Talk” daily on Moody Radio Chicago, authored “Unstuck: Out of Your Cave Into Your Call” with Moody Publishers, studied communications at Moody Bible Institute at age 17 and earned his master’s degree from Moody Theological Seminary.

He came to Moody Bible Institute from a small agricultural town in Spain, where his parents were missionaries. He was overwhelmed by the city, he said, but not long after he arrived as a student, he received some advice that has stuck with him: “The nations have come to the cities. You reach the cities, you reach the nations.”He plans to bring that same approach back with him to Moody.

“I would love the opportunity to help bring some fresh vision and fresh fire to the school that was started by an evangelist that really had a heart for the nations,” he told Religion News Service.

Jobe spoke about what drew him back to Moody, how American evangelical institutions have struggled with diversity and how his experience has prepared him for this role. This interview has been edited for length and clarity.

What drew you back to Moody?

I wasn’t looking to change. I had had offers from different organizations, different people, and my answer was always the same: No, I’m in a vision that’s compelling, I love what I’m doing, I have no desire (to leave.)

When Moody first approached me, I said that I didn’t know if — even if Moody offered me this — that I would say yes. Because I love what I do.

And as we went through the process, we felt like God was confirming one thing after another.

We’ve always had a high appreciation for Moody. Moody has an impact really around the world. As a pastor, I know that one of the greatest challenges is to create a leadership pipeline. Moody has several thousand young people that come to it.

This is the pipeline to train people to be pastors, not-for-profit leaders, teachers and change agents in our world.

That’s what I do: I raise leaders, start churches and lead people to Christ. That’s my passion, and I think that that was Moody’s original passion as well. So I hope to bring that to the school.

How did you end up founding New Life here in Chicago?

A little church in the Back of the Yards neighborhood asked me if I would come to help them out, and I said, I’ll come for three years. It was in a tough neighborhood. There were gangbangers sitting on the steps. They hadn’t had a pastor for a few years. My salary was $8,000 — that’s all they could afford. We had no worship team, no parsonage, no insurance. And I was 21. I like to call it a marriage between desperation and naivete. They were kind of desperate, I was naive, and so we joined together.

That is what is now New Life Community Church.

I didn’t grow up in this city, so the gangs and the violence and all this was just totally foreign to me. But we saw that there were a lot of unchurched people that just wouldn’t go to a church because the church wasn’t set up in a way that would bring them in and attract them. And so we started reaching a lot of very de-churched, unchurched people. It was quite an interesting little crowd we reached, and the church started to grow.

Now you have 27 locations in very different neighborhoods. It seems like that diversity is something that’s very important to you. Why is that, and what does that reflect about Christianity?

In 1995, we were meeting at IIT, Illinois Institute of Technology, and we had grown to about 700 people. We decided that we really wanted to seek God for the city, so we engaged in 40 days of fasting and prayer for the city. I was on my knees with my Bible, and I said, “God, give us 1 percent of the city.” And then I started thinking, “What would a church that reached 1 percent of the city look like?”

From that day on — we started planting out and launching out to different communities. This was before the term “multisite” was even used. From day one and to this day, New Life was, I would say, probably a good 65 to 70 percent nonwhite. Our city is multicultural, so we’re going to reach whoever. We feel like we’re creating life-giving communities of faith that reflect the context and the culture of that neighborhood, the sounds and the music of that neighborhood. The message is the same, but the context is different.

What have you learned in pastoring such a diverse church that you can bring with you to Moody? Do you feel like that’s something that you want to change there?

I believe that Jesus was an immigrant — he was in Egypt and came back. I believe that the early church struggled with multi-ethnicity from the beginning. So I don’t think it’s a new thing, but I think that if we’re going to reach the nations and reach places like Chicago, we definitely have to embrace the cultural context that is rich and diverse from all over the world.

That is my world. I’m not coming in as someone saying, “Let me try to understand diversity.” My world is diversity, so I have to understand places that are less diverse.

What do you feel like you learned from that experience of restarting churches that you can bring to this moment at Moody Bible Institute?

We kind of stumbled into this. Years ago, there was a historic Baptist church in the Lakeview neighborhood that called us up, and an older gentleman said, “Hey, Mark, I have been chairman of the board here at this church for years, and this place was packed out at one time, and we’ve dwindled down to 30 people.”

It was a gentrified neighborhood with lots of new people moving in. This church member said, “We just don’t know how to reach them, and we’re going to close if we don’t get help.”

So I went up there, and — long story short — that church had a beautiful history that went back 103 years. So we honored that history. We bridged the gap with the older saints that were there, but we brought in a whole new crew of people. That became our first restart.

Since then we’ve restarted 15 others: Lutheran, Mennonite, Congregational. We go into these old churches saying, “What a beautiful history you have!” God’s been at work in this place for decades — in some cases, over 100 years. We’re not coming in and saying, “Ah, your history doesn’t matter.” We’re coming in and saying: “Thank you for your sacrifice. Thank you for the beautiful things that God has done in this place, and now we’re taking the baton and taking it to the next generation.”

And so I think that’s what we’re coming in and saying: God has been at work at the Moody Bible Institute for 133 years. We’re so honored that we get to be a part of that tradition and the history. We also understand the message is anchored in the same message that’s been there — gospel-centered, about the Bible, Jesus — but the way we reach this next generation will look different than it did 100 years ago. So  we need to equip and empower students to be able to reach this next generation. 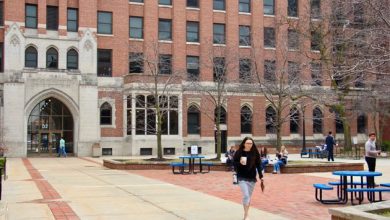