‘I Can Only Imagine’ reveals redemptive possibilities

Home » ‘I Can Only Imagine’ reveals redemptive possibilities

Everyone needs a Mrs. Fincher in their lives, says Priscilla Shirer of her character who stirs up the gift in MercyMe lead singer Bart Millard in the upcoming movie “I Can Only Imagine.”

“She’s like a Moses who calls out Joshua and says ‘This is what you are capable of doing. You don’t know it, and you don’t see it, but there’s a gift there, and I’m going to make you use it whether you like it or not,'” said Shirer.

Shirer portrays a light in Millard’s childhood hardened by a mother’s desertion and a father’s abuse that inspired Christian band MercyMe’s crossover megahit “I Can Only Imagine,” the subject of the movie opening in theaters March 16.

“Everybody needs someone who sees in them what they do not see in themselves,” Shirer said, “and gives them an opportunity to operate in that gifting, even when they would prefer to sulk in their devastated dreams.” 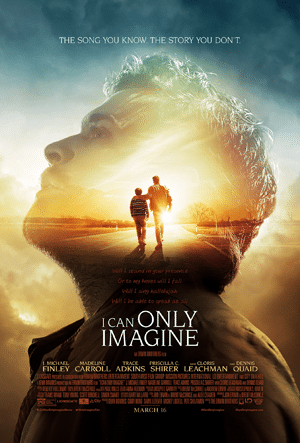 The movie benefits from the popularity of the song that, according to movie presenters Lionsgate and Roadside Attractions, is the most-played radio single in Christian music history. It is the fourth feature film of co-directors and brothers Jon and Andrew Erwin of “October Baby” and “Woodlawn” fame, and in addition to Shirer, casts movie heavyweights Dennis Quaid and Cloris Leachman. J. Michael Finley, who debuted on Broadway in “Les Miserables” plays Millard, with country music star Trace Adkins as a music industry professional.

The faith-based movie is an important tool in spreading the hope of the Gospel, said Shirer, a Bible teacher through her international Going Beyond Ministries, and award-winning author of New York Times best sellers “The Resolution for Women” and “Fervent: A Woman’s Battle Plan for Serious, Specific and Strategic Prayer.” She also starred as Elizabeth in the 2015 box-office hit and Christian film “War Room.”

The daughter of megachurch pastor and best-selling author Tony Evans and his wife Lois did not experience the childhood tragedies Millard shares in the movie, but Shirer said the movie’s messages of forgiveness, love and triumph still personally resonate.

“Just that sense of redemption, that sense of forgiveness that’s possible, even when someone’s hurt you, when you’ve been devastated by the people you trust the most,” are what resonate with Shirer, she said. “While that’s not my story, while I had parents very much that walked in integrity, still do, loved us and raised us well, that does not say that there haven’t been in my life other people who I trusted, people who betrayed or who talked about, or who did what to me amounted to the worst of abuses.”

Millard’s story displays the redemptive possibilities that exist for everyone struggling with forgiveness, Shirer said.

“We can either live in that callousness, we can live in that resentment, we can refuse to forgive and carry that with us,” she said, “or allow the healing power of God’s grace … to be an illustration of how we need to treat others.

“So when we see that displayed in this story on screen through I Can Only Imagine, it’s going to remind us in our own lives,” she said, “and it reminds me in my own life of the times when the Lord has reminded me of His grace towards me, and continues to encourage me to dispense that grace to others.”

The movie offers church and personal resources at ICanOnlyImagineResources.com, including a Bible study and companion journal, sermons, videos and church campaign materials.

The movie can reach those who don’t regularly attend church, Shirer said.

“I Can Only Imagine, the song, has touched so many people,” Shirer said. “Folks that don’t know left from right in the Scriptures, Old Testament from New Testament, maybe they’ve never been to church. They have heard the song…. They know it moves them. Bart Millard wrote a song that moves people.

“Because they’ve heard the song and they love the song, they’ll be drawn to know why the guy wrote the song,” said Shirer. “If you ask Bart Millard, ‘How do you know God is real?’ he says, ‘Because if my daddy could go from being the monster he was … to the man he became during the last two years of his life when he gave his life to Jesus, then I know there must be a God somewhere.'”

‘I Can Only Imagine’ reaches 75 countries

‘I Can Only Imagine’ opens big

‘I Can Only Imagine’ a ‘leap forward’ from previous films, director Jon Erwin says

I Can Only Imagine movie: Abuse, anger, redemption