“Holy, Holy, Holy!” has been chosen in a March Madness-like tournament as “the greatest hymn of all time.”

The Hymn Society in the United States and Canada announced the winner on Thursday (July 18), the last day of its annual conference in Dallas.

“Some matchups were real nail-biters, while in others one hymn blew its opposition out of the water!” reads a Thursday post on the society’s Facebook page. “Yesterday was the final round and we can safely say that the Greatest Hymn of All Time — as chosen by you — is: Holy, Holy Holy!!!”

More than 800 people, mostly members of the 1,200-member Hymn Society, voted on the society’s website, on Facebook and, in the last rounds, in person at the conference during the competition that featured brackets similar to the springtime NCAA basketball tradition. 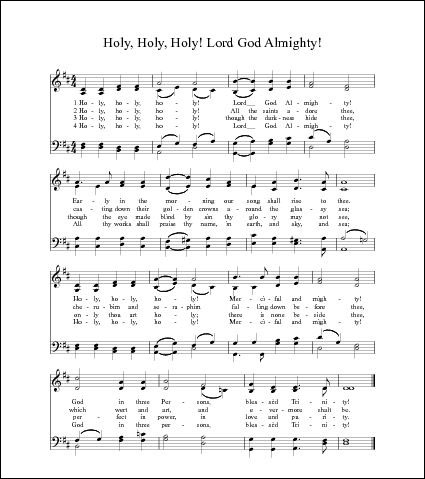 Hymn experts said it was fitting, if not surprising, that “Holy, Holy, Holy!” — which trounced “Amazing Grace,” 70% to 30% in the second round — defeated its musical challengers.

Christopher Phillips, author of the 2018 book “The Hymnal: A Reading History,” said “Holy, Holy, Holy!” is “something of a natural champion among hymns of various eras.

“The words and music have a stately, majestic quality, something many worshippers want to associate with the traditional hymn repertoire,” he said.

Phillips, a professor at Lafayette College in Easton, Pennsylvania, added that the hymn’s tune by English clergyman John B. Dykes is one of the 19th century’s best. The words by Anglican bishop Reginald Heber, he said, “are an elegant way of affirming the basic belief in the Trinity that unites most Christian denominations regardless of other doctrinal differences.”

Eileen Guenther, church music professor at Washington’s Wesley Theological Seminary, said the society’s approach to the tournament, providing hymn titles from which to choose rather than asking people to list their favorites, means the winner is a barometer “with borders” on what enthusiasts consider the greatest one.

“I think what it really speaks to is our quest today for the past,” she said, adding that people may have voted for “Holy, Holy, Holy!” because they recalled singing it as children.

“So having a hymn of long-time history, deep roots probably makes sense for a questionnaire right now,” said Guenther. “And my guess is if that same questionnaire happened another time, that we would get an entirely different response.”