Grant Lottering should be dead. Instead, he’s making a difference on and off his bike.

Lottering, a South African cyclist, was preparing for the year’s World Championships in 2013 when he took a turn too fast, lost control of his bike and slammed into a wall of rocks at about 40 mph.

He shattered 22 bones in the crash – including the femur in his right leg when a competitor smashed into him in the resulting pile-up – and suffered severe internal injuries, including two collapsed lungs and thorax. When his heart stopped, paramedics twice tried to shock it back to life, to no avail.

Through it all, Lottering never lost consciousness. He was vomiting blood, couldn’t breathe, couldn’t hear. The pain was biblical. Then, while he could still see all the chaos of the frantic rescue effort unfolding around him, his discomfort began to fade. Suddenly, he couldn’t feel anything. Any fear was gone now, too. In its place, total peace. “Lord, I’m dying,” prayed Lottering, who a few hours earlier had prayed only for a good performance that day. “Take me.”

Lottering was declared dead on the scene. He shouldn’t be here to tell his story. But he is here, saved by the grace of God and the surgeon he credits for never giving up on him. As it turned out, his life was just beginning.

Now, eight years on, Lottering is not just still alive but is living life to the absolute fullest. Steadfast in the belief that God spared him death for a specific purpose, he has spent the time since the crash devoting himself to sharing his journey for the betterment of others.

“Hearing his story about how he spoke to God and the work that he does, it really resonated with me. It’s the true underdog story,” says UHSM president Christopher Jin. “Everyone deserves a second chance, but not everybody gets it. His story needs to be heard by as many people as possible. We can be a sounding board for him and help get his message out in the U.S. The fact that he’s so grounded in faith just makes us that much more aligned.”

As the world emerges from the global pandemic, Lottering is preparing to travel to the U.S. to complete a speaking circuit and also his first Im’possible Tour in the U.S.

His partnership with UHSM, on the surface, would not appear to be the most obvious marriage, pairing a U.S. company with a South African athlete.

“That’s what we thought at first,” Jin added. “But the more we thought about it we realized that he stands for everything that we do. Faith, charity, inspiration, positivity – they all have no boundaries.”

The US Im’possible Tour has the catchy hashtag of #BeforeIDieAgain and will be in aid of the Laureus Sport for Good Foundation USA. The date has been penciled in for Sept. 28-Oct. 1, 2021. It is no small feat, a 1,000-mile non-stop traverse starting in Nevada City and navigating its way through the California Mission Trail, after an elevation gain totaling more than 65,000 feet.

Yet believe it or not, Lottering was lousy at sports as a kid, the team variety in particular. When he discovered cycling, though, he held onto his bike like a life raft. He loved the individual nature of it, that didn’t have to rely on anyone else, that he could compete against himself. He was a Christian before the accident, but accepts that much of his life was “always about me, myself and I.”

But lying in that hospital bed in Italy – Lottering spent 21 days in the ICU – he found his outlook had evolved. His faith, already in place, had now become unbreakable. Given a second chance at life, he was determined not to squander it. “I think what changed was I really just surrendered my life to God, and I said, ‘God, here I am. If not for you, I wouldn’t be here. What do you want me to do? Why am I here? What’s the plan?’”

Pretty quickly, he settled on the idea that whatever the future held, it involved him riding his bike. The problem was every doctor assured him that he would never ride again.

Lottering had always been stubborn, a single-mindedness that made him successful on and off two wheels; he’d also been a banker who worked in Barclays Africa’s’ consulting & actuarial division. Not only was he determined to prove the experts wrong, he told them he’d be back in Italy the following summer to complete the event that nearly claimed his life.

“I had this newfound knowledge, almost, that my life was not really very relevant before my accident,” Lottering says. “I reckoned if I had died, no one would have remembered me, maybe just a few family members, within a year. I wanted my life to matter. I wanted to make a difference. I wanted to better the lives of people, especially underprivileged children. How can I do it?”

For him, going back to finish the race within a year was the only answer. Lottering believed that story could inspire others to overcome their own seemingly insurmountable obstacles – but only if he could do it within his self-imposed, Hollywood-ending timeline.

It takes most people who fracture their femur – the longest human bone – at least 12 months to recover. Lottering was back on his bike, and started training, in seven. “I could barely walk,” he says. “But I rode.”

Sure enough, 11 months later, Lottering safely took the same turn that should’ve killed him on his way to the finish line. He rode slowly, of course, as only five of the 12 surgeries he’d need had been performed by then.

Yet the achievement was far more satisfying than any win he’d ever had. Soon, Lottering was looking for a bigger challenge.

“If you can do that, surely you can do a lot more once you’ve fully recovered,” he remembers thinking. “I started working on this idea that I can raise a lot of money if I can ride further and higher and longer than anybody else.”

So he did. In 2016, Grant pedaled 1,000 km (621 miles) solo, non-stop, through the French Alps in 46 hours. Two years later, he cycled the length of the French Pyrenees and Alps non-stop in under three days. He was the first person to accomplish each feat.

Going fast again wasn’t easy for Lottering. “I remember the first time I started riding my bike again,” he says. “The minute the road went downhill, I was on the brakes. I had to get my head around it.”

These days, he’s riding down mountains at night, sometimes in the rain, on little or no sleep, brakes be damned. Some have called him irresponsible for it. His fiancé, Liesel, “thinks I’m absolutely nuts, and that the lift does not go to the top floor” he laughs. Lottering doesn’t dispute the notion. But he also has no intention of slowing down, not when corporate interests are willing to sponsor him for raising funds for charity and share his testimony across the globe.

“After my accident, I realized there’s a purpose, and the only way you’re going to fulfill that purpose is if you really let go of your life and trust God,” he says. “I’m just a guy who fell off his bike, and I’m making a difference in people’s lives, in children’s lives. And it’s part of why I’m here.”

Grant Lottering’s remarkable comeback from death on July 21, 2013 to conquering the French Alps, Pyrenees, and South Africa, continues to astonish the medical profession and audiences alike. He has shared his story, ‘From Death to the Top of the Alps’, with audiences in over 11 countries around the world and is living proof that one can achieve unbelievable levels of success while persevering in the face of challenges and storms

Breaking | Fiji Rugby Wins the Olympics With Their Hymn of Praise 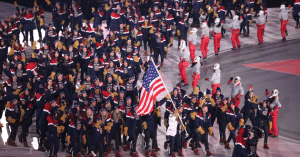