HOUSTON — The Houston grand jury charged with investigating Planned Parenthood in conjunction with undercover videos produced by the pro-life Center for Medical Progress has said the abortion provider broke no laws and instead has indicted CMP journalists on two felony counts.

In response to the indictments, a spokeswoman for Texas Right to Life said that the grand jury process “reeks of something amiss.” She said the case illustrates “a pattern” in the Harris County district attorney’s office of failing to issue indictments in “abortion-related” cases despite significant evidence that abortionists have committed crimes. 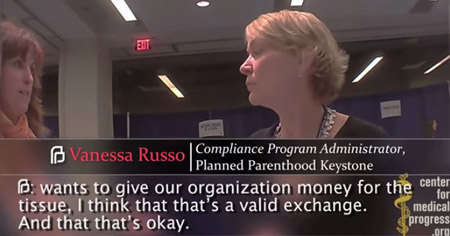 CMP founder David Daleiden and his colleague Sandra Merritt were both indicted on felony charges of tampering with a government record, Harris County district attorney Devon Anderson announced Jan. 25. The New York Times speculated the charges may stem from making and presenting fake identification resembling California driver’s licenses in conjunction with the CMP’s investigation of Planned Parenthood’s Houston affiliate. If convicted, the journalists each could face up to 20 years in prison, according to the Houston Chronicle.

Daleiden also was indicted on a misdemeanor charge related to purchasing human organs.

Asked by Moore at the Evangelicals For Life conference in Washington whether he was “making morality relative here by using lying and deception,” Daleiden responded, “I think that undercover work is fundamentally different from lying because the purpose of undercover work is to serve the truth and to bring the truth to greater clarity and to communicate the truth more strongly.”

Deleiden continued, “Certainly in normal everyday life we don’t always communicate the truth by a simple one-equals-one mathematical way of speaking. We often use poetry and metaphor and even pretext in order to communicate really important truth in a more clear way. Our Lord did that in the Gospels with the parables; it’s often done throughout the Holy Scriptures; and so I see undercover work in that same sort of vein, as a creative way of communicating and speaking that is in service of the truth.”

Anderson said the grand jury’s investigation, which lasted more than two months, was “lengthy and thorough” and involved her office, the Houston police and the Texas Rangers, the Times reported.

CMP posted a statement on its website in response to the indictments: “The Center for Medical Progress uses the same undercover techniques that investigative journalists have used for decades in exercising our First Amendment rights to freedom of speech and of the press, and follows all applicable laws. We respect the processes of the Harris County District Attorney, and note that buying fetal tissue requires a seller as well. Planned Parenthood still cannot deny the admissions from their leadership about fetal organ sales captured on video for all the world to see.”

Melissa Conway of Texas Right to Life said that this is not the first time Anderson’s office has declined to indict an abortionist despite what she deemed significant evidence of a crime.

Anderson’s office did not indict abortionist Douglas Karpen in 2013 despite testimony from former employees and “photographic evidence” that he used “barbaric methods of murdering babies born alive during late-term abortions,” Conway, director of external relations at Texas Right to Life, said in written comments. Likewise, “the hard evidence against Planned Parenthood and contained in the investigative video by CMP is overwhelming and undeniable,” yet no indictment of Planned Parenthood officials was handed down.

“This case reeks of something amiss,” Conway said. “…We proudly stand in defense of the efforts of CMP through their investigative reporting and feel that a grave injustice exists as a result of the charges brought against the very people seeking justice on behalf of the true victims in this case — brutally dismembered preborn children.”

Conway and other pro-life activists expressed concern that one of the prosecutors in the Harris County district attorney’s office, Lauren Reeder, has served on the board of directors for Planned Parenthood Gulf Coast since 2013 — a fact confirmed by Reeder’s LinkedIn page.

But Anderson said in August that Reeder “would not be involved in any manner in this investigation.”

“If at any time in the future,” Anderson said according to the Chronicle, “reliable and credible information is brought to my attention that would question our ability to continue to perform a fair, thorough and independent investigation of this matter due to her board membership, I will revisit the issue of seeking the appointment of an independent prosecutor and act accordingly.”

Texas Gov. Greg Abbott and Texas attorney general Ken Paxton both said the state’s investigation of Planned Parenthood will continue, according to CNN.