Many Americans are unaware of various efforts by local Christians or churches to serve their neighbors, according to a new study from Nashville-based LifeWay Research.

In a survey of 1,000 Americans, LifeWay Research looked at 13 service programs conducted by churches – from tutoring kids to teaching job skills. They asked Americans if they’d heard of churches or church members being involved in those activities in the past six months.

Beyond that, acts of service by churches often appear to go unnoticed, said Scott McConnell, executive director of LifeWay Research.

“Unless you’ve received help from a church – or been involved in serving others – these kinds of programs may fly under the radar,” McConnell said. 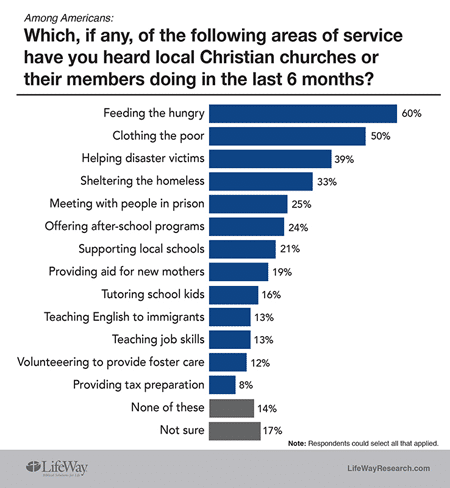 Fourteen percent of Americans haven’t heard of any of these services by churches. Seventeen percent were not sure.

Not surprisingly, Americans who attend religious services at least once a month are more likely to have heard about good works done by congregations:

•  58 percent are aware of churches providing disaster relief compared to 29 percent of those who attend less often.

•  72 percent are aware of churches giving clothing to the poor, while only 39 percent of those who attend church less than once a month have heard of such ministry.

Churches and church members often serve anyone from their community, whether they attend services or not, said McConnell. But outsiders may not get the message, which he said is a problem: If people don’t know about a church’s efforts to serve others, they won’t turn to a church when they need help.

And, with better awareness, those who don’t go to church might show up to help their neighbors.

A previous LifeWay Research study found that half (51 percent) of unchurched Americans – those who haven’t attended services in the past six months – say they would be willing to help a church with a community service project.

“People who need help may be missing out,” McConnell said. “And Americans who want to lend a hand might miss the chance to help out and along the way connect with the church.”