Biblical creation gets a college-themed airing as the origin of humanity in a film scheduled to open on select dates through March.

Longtime Christian filmmaker Rich Christiano directs “A Matter of Faith,” which features a fictional debate between the Christian father of a college freshman daughter and her professor who teaches evolution.

“The main purpose of this movie is to present the Gospel in a unique and touching manner, but the film revolves around the subject of evolution versus creation,” said Christiano. “As many know, the idea of evolution is basically taught in our schools and universities across this great land of ours as a matter of fact. Yet nobody can prove evolution, because nobody was there at the beginning; just as no person can prove creation, since nobody was there at the beginning.

“Both of these teachings then become a matter of faith, not fact,” he said. “The crux of the evolution/creation debate comes down to a simple question: ‘Who are you putting your faith in —what Darwin and others like him say or what God says in the Bible’?” he continued.

Among A Matter of Faith’s endorsers are Ken Ham, founder of Answers in Genesis (AIG) and the Creation Museum among various Christian leaders and pastors.

“A Matter of Faith has a message that is highly relevant and desperately needed for America today,” Ham is quoted as saying on the movie’s website, AMatterofFaithMovie.com. “AIG doesn’t endorse many movies, even those that are supposedly ‘Christian’ based. We are fully behind A Matter of Faith as it defends the authority of the Bible beginning in Genesis.”

“Every believer needs to see A Matter of Faith to challenge us in our faith and our boldness to not be ashamed of the Gospel and to be prepared to give the Hope of what we have,” he said. “Every seeker needs to see this movie as it answers the questions we might have about the truth of the Gospel. In fact everyone, churched or unchurched, should see this movie as it touches so many areas of one’s life and faith.”

The film has already been previewed numerous times, but opens in 60 locations as early as Feb. 6. 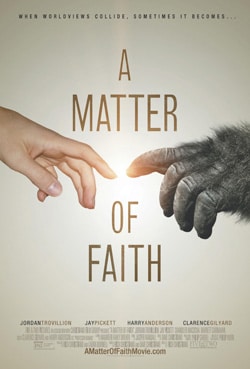 Communities can bring the film to their local theaters by purchasing 1,000 tickets in advance of opening night, the movie’s website explains at AMatterofFaithMovie.com, which also encourages individuals to submit forms expressing a desire for the movie to be shown in their vicinity.

“We have received excellent response from this film from viewers of all ages, having played the film in over 40 cities so far in theaters,” Christiano said. “We have a unique revenue sharing marketing plan where we are partnering with local Christians around the country to help bring the film to their community as outreach.”

Christiano said he hopes the film “will cause a stir about the issue of evolution and creation, to bring this to the forefront so that Christians can dialogue with other people about this, and use the subject as a witnessing tool.”

“The battle for the truth about creation is critical to Christian doctrine and fundamental to the faith,” Christiano said. “Many have bought into the evolution teaching, especially at a young age, because this is what they hear in their schools.”

Christiano has directed a number of successful Christian movies, including the award-winning “Time Changer” with Gavin MacLeod and Jennifer O’Neill and “The Secrets of Jonathan Sperry” with MacLeod and Robert Guillaume. Christiano and his brother Dave Christiano have been writing, directing and producing Christian films since 1985.

“We aim to make films that first please the Lord; second inspire, motivate and challenge believers; and third, share the Gospel so that non-believers will consider receiving the Lord,” Rich Christiano said. “Movies are a powerful tool that the enemy has used to tear down our society and we believe the Lord can use films that glorify Him and His truths to help build people back up.”

Unique in the universe

Fossils said to be ‘at odds’ with evolutionary theory

Evolution’s can opener | The origin of life gets even trickier

The Tentacles of a dilemma: Darwinism vs. the octopus