James B. Irwin, one of the three astronauts who participated in the Apollo 15 mission, had a close encounter of the God kind — on the moon.

Standing on the surface of the “blue planet,” as he called it, gazing at the spectacular beauty of Earth some 238,000 miles away, Irwin experienced the nearness of Jesus Christ in a profound way, unlike anything he’d ever felt before on Earth. Irwin said Jesus’s presence was so tangible “[that] at one point I turned around and looked over my shoulder as if he was standing there.”

Before his mission to the moon, Irwin considered himself, at best, a “nominal” Christian. As a result of his lunar encounter with God, he experienced new courage and boldness to witness for Jesus Christ. Within a year of his return from space, Irwin resigned from NASA and formed High Flight Foundation, which “serves as goodwill ambassadors delivering a message of hope and peace to the nations.” Irwin once noted, “Jesus walking on the Earth is more important than man walking on the moon.”

We need moments with Jesus that impart courage and power to carry out whatever assignment God has given us in this life. Of course, we don’t have to be on the moon for Jesus to show up — he’ll meet us wherever we are, in any circumstance. Philosopher, theologian and apologist William Lane Craig writes, “If you’re sincerely seeking God, God will make his existence evident to you.”

The Christmas story is a timely reminder of this reality.

In his gospel, Apostle Matthew records the amazing story of the “magi” — whom we often refer to as “wise men” — who arrived in Jerusalem after Jesus was born in Bethlehem of Judea (Matthew 2:1). They caused quite a stir when they asked, “Where is he who has been born King of the Jews? For we saw his star in the east and have come to worship him” (Matthew 2:2).

Many biblical scholars agree that these wise men may have traveled more than 800 miles – a journey that could have taken anywhere from several months to two years – to worship Jesus. As astrologers who studied sacred writings, they believed the prophets who wrote, “And you Bethlehem, land of Judah…out of you shall come forth a Ruler, who will shepherd my people Israel” (Matthew 2:6). They were looking for him.

Matthew makes a point to tell us that the “star, which they had seen in the east, went on before them until it came and stood over where the child was” (Matthew 2:9). In the original Greek, the phrase “went before them” means to “lead by going ahead of.” There was no frantic searching to find the Christ child. The magi simply followed the star to the house where they “saw the child with Mary his mother; and they fell down and worshipped him. Then they opened their treasures and presented him with gifts of gold, frankincense and myrrh” (Matthew 2:11).

Throughout Scripture, we are encouraged to seek the Lord:

“But seek first the kingdom of God and his righteousness, and all these things will be added to you” (Matthew 6:33 ESV).

If only we had a “star” to go before us and lead the way.

The good news of Christmas is that we do have a guide. Jesus promised in John 16 that he would send us a “Helper.” He called this person the “Spirit of truth” who “will guide you into all the truth, for he will not speak on his own authority, but whatever he hears he will speak, and he will declare to you the things that are to come.” (vs. 13 ESV). That person is the Holy Spirit, the third person of the Trinity.

Because of the birth of Christ, his sacrifice on the cross and his bodily resurrection, we can seek the Lord under the guidance of the Holy Spirit: thinking, praying and meditating on his Word- The Bible to us.

Wise men and women still seek Jesus every day. This Christmas, allow your life to be transformed by encountering and worshiping the Savior who came and changed the world.

Tim Clinton is the President of the American Association of Christian Counselors (AACC), the largest and most diverse Christian counseling association in the world. Dr. Clinton also serves as the Executive Director of the James Dobson Family Institute and recurring co-host of “Dr. James Dobson’s Family Talk”, heard on nearly 1,300 radio outlets daily. 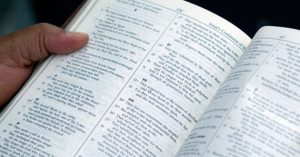