Churchgoers say they tithe, but not always to church

Home » Churchgoers say they tithe, but not always to church

Most churchgoers say the Bible commands them to give. But their tithes don’t always go in the offering plate.

Half of Protestant churchgoers say their tithes can go to a Christian ministry rather than a church, compared to what is often taught by pastors and Bible study aids.

A third say tithes can go to help an individual in need and nearly one in five say tithes can even go a secular charity, according to a new study by Nashville-based LifeWay Research.

“For many churchgoers, tithing is just another term for generosity,” said Scott McConnell, executive director of LifeWay Research.

Churchgoers say tithing still matters
For the study, LifeWay Research surveyed 1,010 Americans who attend services at a Protestant or nondenominational church at least once a month — as well as 1,000 Protestant senior pastors. 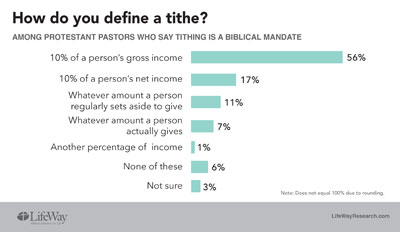 Most churchgoers believe they are commanded to give. And many believe in the idea of tithing, which is typically understood as giving away 10 percent of a person’s income.

Eighty-three percent agree when asked, “Is tithing a biblical command that still applies today?” Eight percent say it is not. Ten percent aren’t sure.

Most of those in the South (85 percent) as well as the Northeast (74 percent) say tithing applies today. So do African American (87 percent) and white churchgoers (80 percent).

Those who have evangelical beliefs (86 percent) say it is a biblical command for today. So do 79 percent of other churchgoers. Many Baptists (87 percent), Pentecostals, (86 percent), nondenominational churchgoers (81 percent) and Lutherans (68 percent) agree as well.

“Even those who can’t tithe believe that giving matters,” McConnell said. “Most churchgoers say they give — even if it’s a struggle.”

Those who go to church one or two times a month are twice as likely to say finances make it hard to give (13 percent) than those who attend at least once a week (7 percent).

And tithes can be spread around, according to churchgoers.

Fewer than half of churchgoers (47 percent) say only giving to the church counts for tithing.

Whatever amount they give, churchgoers prefer to drop their tithes and other donations in the offering plate at church.

There’s something about putting cash or a check in the offering plate that still appeals to churchgoers, McConnell said.

“Giving is considered an act of worship — and clicking on a mouse may not feel as holy as putting your offering in the collection plate,” he said.

Sermons on giving
As part of the study, LifeWay Research asked Protestant senior pastors how often they talk about tithing.

One in 5 has never made tithing a primary focus of a sermon.

Pastors are less likely than churchgoers to say tithing is still a biblical command.

Seventy-two percent of pastors say tithing is “a biblical command that still applies today.” Twenty-five percent say it is not. Three percent are not sure.

“Both pastors and churchgoers see giving as a vital part of their faith,” McConnell said. “They don’t always agree on how much a churchgoer should give. But most seem to see 10 percent as an ideal to strive for.”

— by Bob Smietana
Smietana is senior writer for Facts & Trends