Biblical history in your hands

Home » Biblical history in your hands

Second Samuel 20 tells the story of a short-lived rebellion against the rule of King David led by a Benjamite named Sheba, a kinsman of David’s predecessor, Saul. It’s a short, almost enigmatic, tale involving, among other things, cloistered concubines, deadly beard-pulling, and an unintentionally—or perhaps not—comical siege scene that could have come out of a Monty Python movie.

Comic or not, the site of the siege was a real place that testifies to the historical nature of the biblical narrative.

In II Samuel, David, fresh off his tragic victory over his beloved son Absalom, is confronted with a new rebellion resulting from strife between the ten northern tribes and the tribe of Judah. The aforementioned Sheba takes advantage of the situation and rallies men under the cry,“We have no share in David, no part in Jesse’s son!”

David sends his nephews Abishai and Joab, along with his “mighty men” (gibborim in Hebrew) in pursuit of Sheba. Sheba hides from them in the city of Abel Beth Maacah in what is now northern Israel and back then, at the crossroads of the ancient kingdoms of Israel, Damascus and Tyre.

As David’s forces lay siege to Abel Beth Maacah, a “wise woman” asks Joab why they are attacking a “peaceful” and “faithful” part of the kingdom. He replies that if they hand over Sheba, he will withdraw his forces, to which she replied, “His head will be thrown to you from the wall.” It was, and Joab did as he promised.

At this point, we shouldn’t be surprised when archaeology confirms that the biblical narratives weren’t simply making up places and people.

What is, if not surprising, then intriguing, is what the team of American and Israeli archaeologists found at the site: a tiny—about 2 inches by 2 inches—“intricately carved sculpture of what may be the head of a biblical king.” 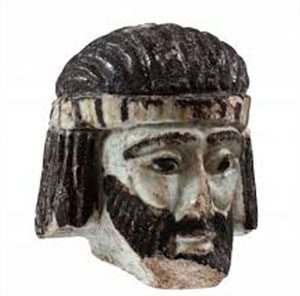 The carving, which is made of a glazed ceramic known as “faience,” is of “a man with long, black hair and a beard who is wearing a yellow and black headband.”

The archaeologists are reasonably certain it depicts an important person, probably a king given that the figure “was crafted with artistic precision almost unheard of for that time and region.”

But who? The most tantalizing possibilities are, as hinted earlier, three kings mentioned in the Bible whose reign coincided with the timing of the carving, sometime in the ninth century B.C., which also corresponds with the years of the city’s next biblical mention in 1 Kings 15. They are King Ahab, King Ethbaal of Tyre, the father of the notorious Queen Jezebel, and King Hazael of Damascus, who was anointed king by the prophet Elijah.

As the archaeologists admit, they’re only guessing about who the carving represents. As one member of them put it, “It’s like a hello from the past, but we don’t know anything else about it.”

But it’s a “hello” from an actual, not mythical, past that we only know about because of the historical nature of the biblical accounts. These accounts tell the story of a God who has acted in human history and whose actions, in turn, have left behind artifacts.