Backpage.com shut down by feds over sex ads

Home » Backpage.com shut down by feds over sex ads

Opponents of human trafficking have applauded the federal government’s shutdown of Backpage.com, reportedly the leading online facilitator of the sex trade.

An April 6 message at Backpage.com announced the Federal Bureau of Investigation (FBI) and other government entities had seized the website and its affiliates “as part of an enforcement action.” The FBI and the Justice Department have made no further announcements about the investigation.

The use of the internet now dominates the trafficking of adults and children for sexual purposes, and Backpage.com — a classified advertising company — is regarded as preeminent in facilitating the trade. More than 73 percent of reports by the public to the National Center for Missing and Exploited Children concern a Backpage.com ad, the center said in January 2017.

“Backpage is a sex-trafficking storefront masquerading as a website,” said ethicist Russell Moore.

“Vulnerable women and children are having their lives shredded by predators and those who empower them and who profit from them,” said Moore, president of the Ethics & Religious Liberty Commission, in written comments. “It is time for this society to get serious about the scourge of sex trafficking.”

Polaris — a leading, anti-trafficking organization — called the government action “a major victory and milestone in the fight against sex trafficking.” 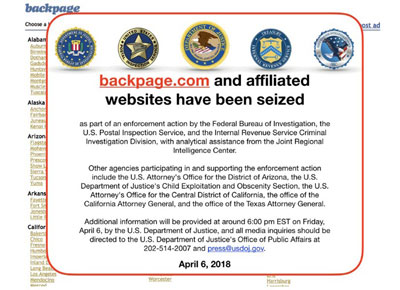 “Shutting down the largest online U.S. marketplace for sex trafficking will dramatically reduce the profitability of forcing people into the commercial sex trade, at least in the short term,” said Polaris Chief Executive Officer Bradley Myles in a written statement. “Traffickers will have to rethink their business models and sex buyers will face greater risk. The flow of easy money will slow and, as a result, fewer vulnerable people will be bought and sold against their will.”

Donna Rice Hughes, president of the internet safety organization Enough Is Enough, described it as a “titanic VICTORY” in a written message.

The government’s seizure of Backpage came barely two weeks after Congress completed passage of legislation designed to hold accountable online sites that facilitate sex trafficking. The Senate approved the bill in a 97-2 vote March 21 following the House of Representatives’ adoption of the measure in a 388-25 roll call in late February. President Trump is expected to sign the bill soon.

If enacted, the Allow States and Victims to Fight Online Sex Trafficking Act (FOSTA) would amend a 1996 anti-obscenity federal law to authorize the prosecution of websites that support the sale of people in the sex trade. The proposal — which includes provisions from the Senate’s Stop Enabling Sex Traffickers Act (SESTA) — also would clarify that trafficking victims have the right to bring civil action against such online sites as Backpage.com.

Sen. Rob Portman, R-Ohio, SESTA’s sponsor, called the seizure of Backpage.com “good news for victims and survivors of online sex trafficking. While this action is long overdue, it is a positive step forward in our efforts to hold accountable sex traffickers that sell women and children online.”

The Women’s March, however, criticized the action against Backpage.com. On Twitter, march leaders called the shutdown “an absolute crisis for sex workers who rely on the site to safely get in touch with clients. Sex workers rights are women’s rights.”

The seizure notice on Backpage.com said those participating in the action included not just the FBI but the U.S. Postal Inspection Service, the Internal Revenue Service Criminal Investigation Division, the Justice Department’s Child Exploitation and Obscenity Section, U.S. attorneys in Arizona and California, and the attorneys general of California and Texas.

In January 2017, a Senate investigative subcommittee chaired by Portman reported Backpage knows its site facilitates prostitution and child sex trafficking. The Permanent Subcommittee on Investigations of the Committee on Homeland Security and Governmental Affairs also found Backpage had hidden evidence of criminal acts by editing the ads in its “adult” section and by coaching its customers to post acceptable ads for illegal activities. The panel called for the Justice Department to investigate Backpage.

The subcommittee reported Backpage’s increase in gross revenue from $5.3 million in 2008 to $135 million in 2014 “was attributable to ‘adult’ advertisements.”

Backpage shut down its “adult” section shortly after the Senate subcommittee released its report in 2017, but ads for prostitution and child sex trafficking reportedly were moved to other places on the site, such as its dating section.