Americans worry more about reputation then their conscience

Home » Americans worry more about reputation then their conscience

Many Americans are more worried about their reputation than their conscience, according to a new study.

They worry less about guilt and fear and more about avoiding shame, according to the study from LifeWay Research that was released May 23.

McConnell added, “What’s surprising is not that personal freedom, ambition, and doing the right thing are valued by Americans. It’s that risk to our reputation is what matters most.”

Shaming has been a part of American life since the days of “The Scarlet Letter.” Set among the Puritans, the novel tells the story of Hester Prynne, a young mother forced to wear a scarlet “A” after committing adultery, considered a crime at the time. But Americans gave up on public shaming of criminals in the 1830s, according to journalist Jon Ronson, author of “So You’ve Been Publicly Shamed.” 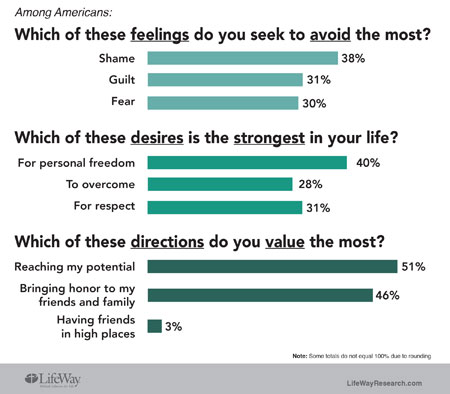 Since then, Americans have been more concerned about issues like guilt over wrongdoing, McConnell said. That’s shaped how churches have presented their faith to the public, he said.

McConnell said LifeWay Research wanted to know if guilt is still a major issue for Americans. That might affect how Christians talk about their faith, he said, since Christianity also addresses needs such as shame and fear.

“We wanted to know: are churches addressing the issues Americans care about most?” McConnell said.

Researchers asked 1,000 Americans three questions to discover their feelings about fear, shame, guilt and other issues.

Education and age play a role in what feelings Americans avoid. Those with graduate degrees (44 percent) are more likely to avoid shame than those with high school diplomas or less (34 percent). Americans ages 25 to 34 avoid guilt (37 percent) more than those 55 and older (27 percent). Middle-aged Americans — those 35 to 54 — are the most likely age group to worry about shame at 44 percent.

McConnell wonders whether Americans see shame as a bigger threat to their reputation or self-worth than guilt.

“Guilt says, I deserve to be punished,” he said. “But shame says, I am worthless.”

The study found Americans still prize independence. When asked to name what they desire most from a list of options, 40 percent name personal freedom. Thirty-one percent say respect, while 28 percent say they desire to overcome.

The desire to overcome, the study shows, matters more to Hispanic Americans (37 percent) than to white Americans (25 percent). Those from non-Christian faiths (40 percent) value overcoming more than Christians (27 percent).

Christians (35 percent) were more likely to desire respect than nones (21 percent) and those from non-Christian faiths (22 percent).

Some of the most interesting findings, said McConnell, came when researchers asked Americans, “Which of these directions do you value most?”

Almost no one (3 percent) chose having friends in high places. Instead, Americans were split almost down the middle between reaching their potential (51 percent) and bringing honor to family and friends (46 percent).

McConnell sees a link between the two. Americans are ambitious, he said, but it’s not always ambition for its own sake.

“We want the people we love to be proud of us,” he said. “Few of us want to let our family and friends down.”

McConnell is skeptical of one finding in the survey — the idea few Americans value having friends in high places. He wonders whether some Americans are ashamed to admit they want to be well connected.

Perhaps, he said, making Mom proud is more powerful than having rich friends.

“We all want to be appreciated by the ones we love,” he said.