Most Americans don’t have a problem celebrating Halloween

Home » Most Americans don’t have a problem celebrating Halloween

When it comes to Halloween, most Americans don’t have a problem celebrating the spooky holiday, a new study shows. Yet, one-third say they avoid Halloween or its pagan elements.

Halloween has been known in North America since colonial days. But it wasn’t until Irish immigrants brought their Halloween customs to America in the 1840s that the festival grew in popularity. Since then, it has been woven into the fabric of American culture. By the 1950s, Halloween was mostly considered a children’s holiday celebrated with costumes and candy.

But Halloween has exploded in popularity the last several years, even among adults. Americans are expected to spend $6.9 billion on Halloween this year, according to the National Retail Federation, more than double the amount spent 10 years ago.

“As popular and pervasive as Halloween has become, there is still a sizeable minority that avoids at least some elements,” said Scott McConnell, vice president of LifeWay Research. 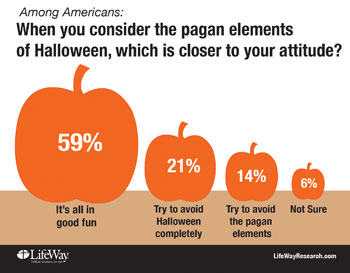 Not surprisingly, nonreligious Americans are most likely to say Halloween is all in good fun (75 percent) and least likely to avoid Halloween completely (11 percent), according to the survey.

Christians aren’t far off from the rest of Americans when it comes to Halloween. A slight majority (54 percent) says Halloween is all in good fun, while 18 percent try to avoid the pagan elements, and 23 percent avoid it completely.

Catholics are more likely to select “It’s all in good fun” (71 percent) than Protestants (49 percent).

Evangelicals are more likely to avoid the holiday completely (28 percent) or its pagan elements (23 percent), although 45 percent say Halloween is “all in good fun.”

Church attendance also affects Americans’ views of Halloween. Those attending a religious service once a week or more are the least likely to say Halloween is all in good fun (44 percent), compared to those attending once or twice a month (68 percent) or only on religious holidays (82 percent).

“More than two-thirds of evangelicals welcome the candy, costumes, or community interaction surrounding the holiday, but the majority are unwilling to label ‘the pagan elements of Halloween’ good.” McConnell said.

Americans are separated by geography as well as age when it comes to attitudes toward Halloween.

Southerners (27 percent) are more likely than those in the West (19 percent), Midwest (18 percent) and Northeast (12 percent) to say they try to avoid Halloween completely.

Methodology: The phone survey of Americans was conducted Sept. 14-28, 2015. The calling utilized random digit dialing. Fifty percent of completes were among landlines and 50 percent were among cellphones. Maximum quotas and slight weights were used for gender, region, age, ethnicity and education to more accurately reflect the population. The completed sample is 1,000 surveys. The sample provides 95 percent confidence that the sampling error does not exceed plus or minus 3.6 percent. Margins of error are higher in subgroups.

Should We Celebrate Halloween – Can We Redeem the Theme?

Amazing 3-Year-Old Forgives Mom for Eating All His Candy

To Boo or Not to Boo: What Should Christians Do With Halloween