Americans fond of Bible, but more than half rarely read it

Home » Americans fond of Bible, but more than half rarely read it

Americans appear to have a positive view of the Bible. And many say Scripture is filled with moral lessons for today.

However, more than half of Americans have read little or none of the Bible, a study released today (April 25) by LifeWay Research shows. Less than a quarter of those who have ever read a Bible have a systematic plan for reading Scripture each day. And a third of Americans never pick it up on their own, according to the survey that the research firm conducted this past fall.

It should be no surprise many church leaders worry about biblical illiteracy, said Scott McConnell, executive director of LifeWay Research.

“Most Americans don’t know first-hand the overall story of the Bible — because they rarely pick it up,” McConnell said. “Even among worship attendees less than half read the Bible daily. The only time most Americans hear from the Bible is when someone else is reading it.” 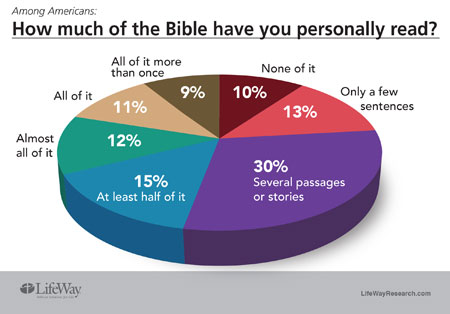 Many unfamiliar with biblical text

Almost nine out of 10 households (87 percent) own a Bible, according to the American Bible Society, and the average household has three.

About half of Americans (53 percent) have read relatively little of the Bible. One in 10 has read none of it, while 13 percent have read a few sentences. Thirty percent say they have read several passages or stories.

Americans also differ in how they approach reading the Bible. Twenty-two percent read a little bit each day, in a systematic approach. A third (35 percent) never pick it up at all, while 30 percent look up things in the Bible when they need to. Nineteen percent re-read their favorite parts, while 17 percent flip open the Bible and read a passage at random. A quarter (27 percent) read sections suggested by others, while 16 percent say they look things up to help others.

Bible seen as good for morals

Overall, Americans have a positive view of the Bible. Thirty-seven percent say it is helpful today, while a similar number call it life-changing (35 percent) or true (36 percent). Half (52 percent) say the Bible is a good source for morals. Few say the Bible is outdated (14 percent), harmful (7 percent) or bigoted (8 percent).

A number of reasons keep Americans from reading the Bible, according to LifeWay Research. About a quarter (27 percent) say they don’t prioritize it, while 15 percent don’t have time. Thirteen percent say they’ve read it enough. Fewer say they don’t read books (9 percent), don’t see how the Bible relates to them (9 percent), or don’t have a copy (6 percent). Ten percent disagree with what the Bible says.

Overall, Americans seem to like the Bible but don’t have much urgency about reading it, McConnell said.

Pastors do their part

One place Americans are still likely to hear the Bible read is in church. And many Protestant pastors try to encourage their flocks to give the Bible a try.

A LifeWay Research survey of 1,000 Protestant senior pastors found most give out free Bibles to those who need them (86 percent), include reminders about reading the Bible in their sermons (86 percent) and include Bible readings in worship services (76 percent).

Two-thirds (64 percent) give out printed Bible-reading plans while 40 percent provide digital-reading plans. Half (52 percent) send out social media reminders, while 46 percent send out reminders by email and newsletters.

Still, it appears people may need more than a plan when it comes to reading the Bible, McConnell said.

McConnell said Americans treat reading the Bible a little bit like exercise. They know it’s important and helpful but they don’t do it. The key for churches, he said, is finding ways for people to experience how reading the Bible can change their lives.

“Scripture describes itself as ‘living and effective,’ according to the book of Hebrews,” McConnell said.

“Those who have a habit of reading through the Bible a little each day say they have experienced this helpful, life-changing quality. Those who approach the book differently tend to say the Bible is positive but much less personal.”