Vice President Mike Pence may not be Catholic anymore, but that didn’t preclude him from headlining the 13th annual National Catholic Prayer Breakfast on June 6.

Each year thousands of Catholics gather in Washington, D.C., to share a meal and pray for the nation. President George W. Bush spoke at the event four years in a row during his final term in office, and House Speaker Paul Ryan, R-Wis., spoke last year.

Pence grew up as one of six children in an Irish Catholic family. He attended Catholic school for eight years and even served as an altar boy. Pence later converted to Protestantism in college.

“While my own faith journey has taken me and my family in a different direction, I want you all to know how much I cherish my Catholic upbringing and cherish the church,” he said.

The vice president touted the Trump administration’s commitment to religious liberty and protecting the lives the unborn.

He pointed to the reversal of the Mexico City policy to prevent taxpayer funding from organizations that perform or promote abortions abroad. Pence also mentioned Trump has signed multiple pieces of pro-life legislation, including a congressional review act which granted states the ability to partly defund Planned Parenthood.

In January, Pence became the first sitting vice president to speak at the March for Life and said he was there because of Trump.

“The president pointed his finger at me without hesitation and said, you go. You go and you tell them we’re with them,” Pence recounted. 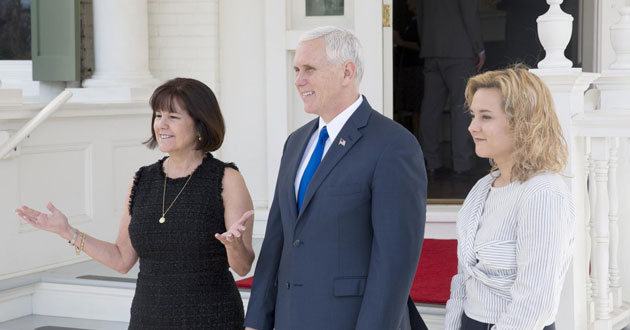